U.S. Chamber of Commerce ‘Strongly Disagrees’ With Tariffs on China 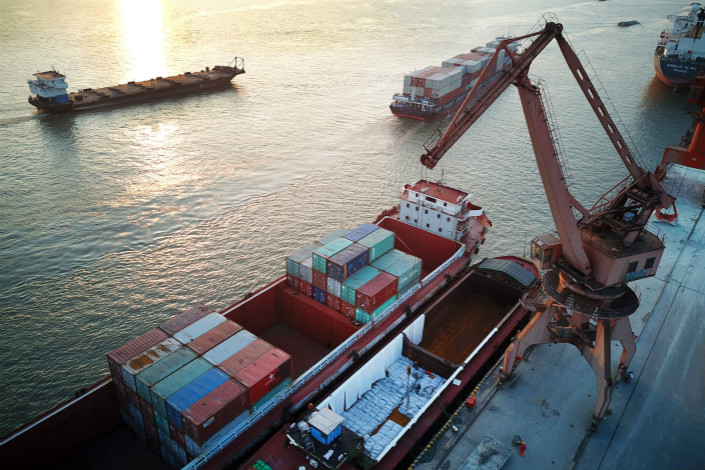 Workers load cargo on March 9 at the port of Nantong in the eastern province of Jiangsu. Photo: VCG

The leading U.S. business lobbying group has warned the Trump administration about a proposed move to impose steep tariffs on Chinese imports, saying they would hurt American consumers and economic growth.

“Tariffs of $30 billion a year would wipe out over a third of the savings American families received from” last year’s tax reform, U.S. Chamber of Commerce President and CEO Thomas Donohue said in a statement Thursday.

“If the tariffs reach $60 billion, which has been rumored, the impact would be even more devastating,” he said.

Donohue’s comments came after reports this week that Washington is considering tariffs on Chinese technology, telecommunications and consumer products, as well as further restrictions on Chinese investments in the U.S.

The potential moves stem in part from a U.S. investigation into China’s intellectual property practices — particularly concerns about Beijing’s policies that mandate U.S. firms transfer technological know-how to Chinese partners if they want to gain access to the world’s second-largest economy.

Donohue said the Trump administration is right to focus on the negative economic impact of China’s industrial policies and unfair trade practices, but the chamber would “strongly disagree” with a decision to impose sweeping tariffs.

“We urge the administration to not impose these tariffs and to work with the business community to resolve the real and justifiable concerns raised by Chinese trade practices,” he said.

The U.S. Chamber of Commerce represents the interests of more than 3 million businesses of all sizes, sectors and regions, as well as state and local chambers and industry associations, making it the most important trade lobbying group in the U.S.

Tensions between Washington and Beijing ran high this week, when the Trump administration said it had asked China to cut its trade surplus with the U.S. by $100 billion. Beijing responded that it would protect its legitimate rights, despite not wanting a trade war.

In a bid to safeguard U.S. technological intellectual property, Washington has killed off a slew of acquisition deals from Chinese firms.

Recent casualties include a $1.2 billion deal by Ant Financial Services Group to buy MoneyGram, the money-transfer provider, and a $580 million sale of Xcerra, a Massachusetts-based semiconductor-maker, to an investment group backed by a Chinese government-controlled fund.

Some analysts said tensions would persist if China didn’t concede in some areas.

“Reduction of the trade deficit and opening-up of service sectors will be a painful experience for China. China needs strong political will to satisfy exorbitant requests from the Trump administration,” Tao added.