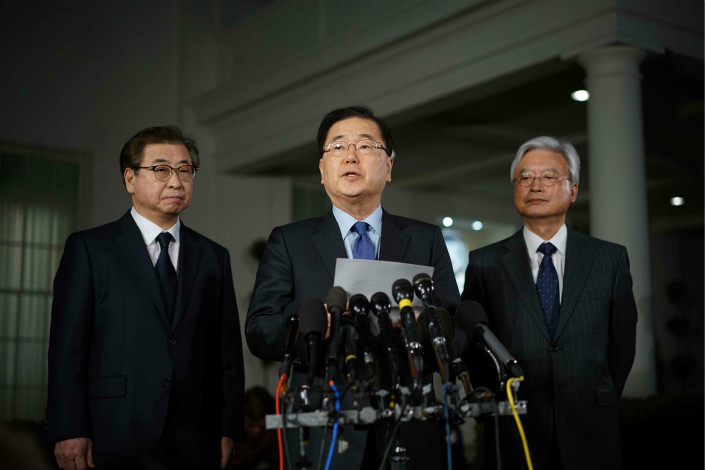 China said it welcomed the “positive signal” sent by the Trump administration’s agreement to hold denuclearization talks with North Korea.

Both sides are moving in the right direction to solve the nuclear issues on the Korean Peninsula, Geng Shuang, spokesman for China’s Foreign Ministry, told reporters in Beijing on Friday.

“What the parties should do next is to work together actively in order to put the situation on the Korean Peninsula back on the track for peace and stability,” Geng said.

“We hope that all parties can demonstrate the political courage and will to push with all-out efforts to restart multilateral talks for a peaceful solution to the nuclear issue,” he said.

Beijing was responding to an announcement by a South Korean official in Washington on Thursday that said U.S. President Donald Trump had accepted an offer from North Korean leader Kim Jong-un to meet in person.

Trump agreed to meet the North Korean leader in May, according to Chun Eui-yong, South Korea’s national security advisor.

However, he didn’t offer details about where the pair would meet. Trump would become the first sitting U.S. president to meet a North Korean leader, if the meeting takes place.

The surprise breakthrough follows an apparent thaw in the relationship between the two Koreas in recent weeks. Athletes from both countries marched into the stadium together at the opening of the Winter Olympics in Pyeongchang in South Korea last month.