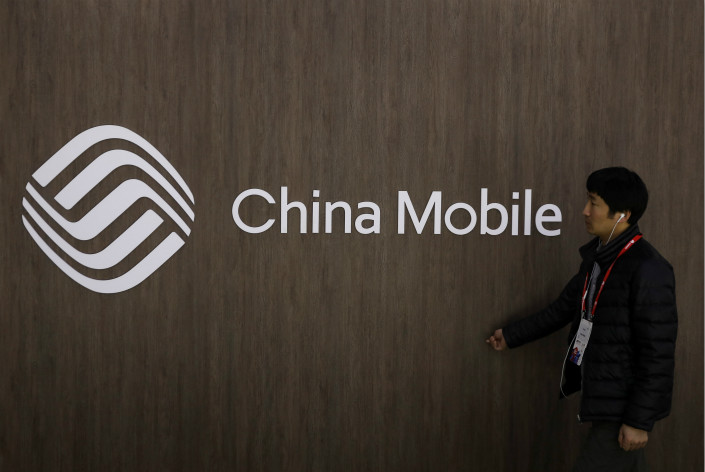 A man walks past the China Mobile logo at the Mobile World Congress in Barcelona, Spain, February 28, 2018. Photo: VCG

Leading wireless carrier China Mobile Ltd. saw its growth stagnate in last year’s fourth quarter, as increasing competition and saturation for its newest 4G services combined to temper expansion of both its profit and revenue.

The company, which controls about two-thirds of China’s wireless market, reported its profit rose 7.5% to 22.2 billion yuan ($3.5 billion) in the fourth quarter, slightly faster than the 6.9% growth in the previous quarter, based on calculations made using its full-year data released on Thursday. Revenue for the latest three months rose 3.2% to 171 billion yuan, marking a slowdown from the previous quarter’s 4.8% growth.

“In 2017, despite disruptive forces in the industry such as the rapid advancement in the information and communication technology (ICT) and significant changes in the competitive landscape of the industry, China Mobile maintained a clear focus on implementing our ‘Big Connectivity’ strategy,” Chairman Shang Bing said in a statement. “Our profitability is maintained at an industry-leading level benchmarked against other world-class operators, providing us with the solid foundation for future growth.”

China Mobile shares fell about 0.8% in afternoon trade in Hong Kong after the results were announced.

The results were roughly in line with market expectation, though the company’s service revenue was weaker-than-expected in the fourth quarter due to government-mandated tariff cuts and competition for data services, Jefferies analyst Edison Lee said in a research note.

Shares of China Mobile and its two main rivals, China Unicom and China Telecom, rallied briefly earlier this month after the government announced new policies aimed at promoting wireless service. The revenue impact of the final policies, including an end to data roaming fees, ended up being less costly to the carriers than many investors had feared.

China Mobile and its peers are increasingly dependent on fees from mobile data as wireless internet-based services steal business from traditional voice and text messaging. China Mobile said that data services generated about two-thirds of its total revenue in 2017, accounting for more than half of its total services revenue for the first time on an annual basis. Voice services revenue contracted by 25% to account for about 21% of total revenue.