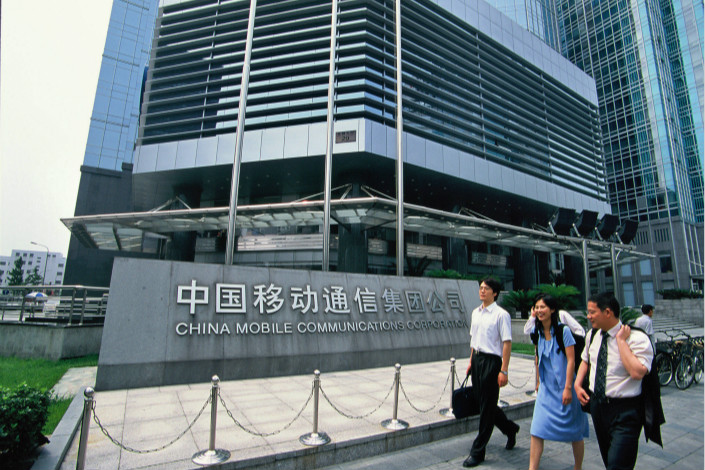 As more users abandon traditional voice and text messaging services, China Mobile Ltd. and its two rivals are being forced to turn to data services to keep their revenue growing. Photo: Visual China

The dominant player in the world’s largest mobile market reported its third-quarter profit rose 6.9% to 29.4 billion yuan ($4.44 billion), according to its latest results announced in Hong Kong. That was more than double than the 3.3% profit growth in the previous quarter. Third-quarter revenue rose 4.8% to 180.6 billion yuan.

China is the world’s largest mobile market with about 1.3 billion subscribers, or nearly one for every person in the country. China Mobile controls about two-thirds of that market, with 878 million subscribers at the end of September, according to its report.

“The group continued to deliver favorable growth in overall performance in the first three quarters of 2017, following its persistent efforts to drive ahead with the integrated development of the ‘four growth engines’ and proactively develop the personal, household, corporate and emerging business markets,” China Mobile said in a statement. “Meanwhile, due to the substitution impact of over-the-top business, voice services continued to decline with total voice usage decreasing by 7.1% compared to the same period last year.”

As the market becomes saturated and more users abandon traditional voice and text messaging services, China Mobile and its two rivals are being forced to turn to data services to keep their revenue growing. Handset data traffic, the company’s largest revenue source, nearly doubled to 8.15 trillion megabytes in the first nine months of the year from 4.83 trillion megabytes a year earlier.

China Mobile and its two rivals, China Telecom Corp. Ltd. and China Unicom, have been aggressively signing up subscribers to their newest 4G networks, which were rolled out several years after peers in most major Western markets. But the telecom regulator in Beijing has signaled that next-generation 5G licenses could come out more in sync with developed markets, as China seeks to become a more-influential player in setting global standards and participate in development of new technologies.

According to a separate report released this week, China is expected to become one of the fastest adopters of 5G when new services start to launch in the next few years, accounting for more than half of all subscribers by 2022. Other countries will catch up after that, but the nation is still expected to account for about 40% of all 5G connections by 2025, according to London-based CCS insight.

Global 5G subscribers are expected to top the 1 billion mark by mid-2023, faster than the uptake rate for current 4G services, the company forecast.

“We see China playing a far more influential role in 5G than it did in 4G,” said CCS analyst Marina Koytcheva. “Size, scale and economic growth give China an obvious head start, but we expect network deployments to be much faster than in the early days of 4G. China will dominate 5G thanks to its political ambition to lead technology development, the inexorable rise of local manufacturer Huawei and the breakneck speed at which consumers have upgraded to 4G connections in the recent past.”