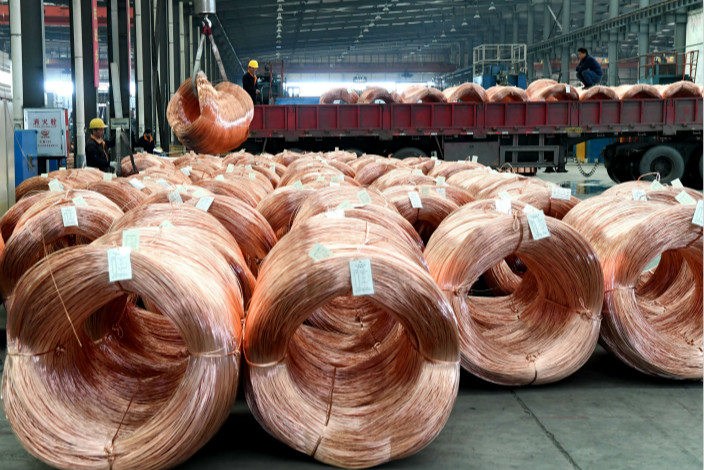 China’s economy got off to a strong start this year on the back of robust capital spending and real estate investment, as well as strong demand for industrial goods.

For the January-February period, value-added industrial output, which measures production at China’s factories, rose 7.2% year-on-year, accelerating from an annual increase of 6.2% in December, according to data released Wednesday by the National Bureau of Statistics (NBS).

Today’s data are broadly upbeat and suggest that the Chinese economy had a strong start to the year,” Julian Evans-Pritchard, senior China economist at research firm Capital Economics, said in a note. “The pick-up in industrial activity mostly reflects an improvement in domestic conditions.”

He added that the distortions to output caused by the government’s anti-pollution campaign seemed to have eased up.

Meanwhile, robust foreign demand remained a key factor shoring up industrial activity, as the growth in industrial export sales edged up to 9.5% in January-February from 9.3% in December, he said.

Expansion in China’s exports hit a three-year high in February, surging 44.5% from a year ago to $171.6 billion, while the exports grew 24% year-on-year in the first two months, official data showed.

After notching 6.9% economic growth in 2017, China set the 2018 growth target for gross domestic product (GDP) at around 6.5%, scrapping the term “higher if possible in practice” that was included in the 2017 government work report. The country’s leadership vowed to pay closer attention to the quality of growth and promised to reduce the debt level across the economy to defuse financial risks.

The NBS published combined retail and factory output figures for January-February to avoid distortions caused by shifts in the timing of the Lunar New Year.

Accumulative urban fixed-asset investment, a key economic growth driver for the country, grew by 7.9% year-on-year in the January-February period, its strongest pace since the January-July period in 2017, the data showed.

Infrastructure spending grew by 16.1% over the first two months of 2018, down from an increase of 19% in 2017, which economists said was a result of fiscal tightening.

Retail sales rose 9.7% year-on-year on the back of growing car sales, with the figure picking up from an increase of 9.4% in December.

“Growth momentum was strong in Jan-Feb,” Zhao Yang, economist with Nomura International, said in a note.

In addition to the traction provided by exports, Zhao believed fixed-asset investment in agriculture was another key driver underpinning growth after the country doubled down on its campaign to ease poverty in rural areas.

“Strong agricultural fixed-asset investment may have benefited from the anti-poverty policy and the central government’s push of investment in rural areas,” he said.

Despite the pickup in investment, Zhao said the real estate sector is actually cooling. He pointed out that other leading indicators like floor space under construction, floor space sold, new starts measured by floor space and construction fund flows into real estate development have all seen their growth slow.

Economists predict the economy will lose some steam in the coming months due to downward pressure from both home and abroad.

“With the current strength of property investment clearly unsustainable and the headwinds from slowing credit growth and tighter fiscal policy still building, we expect this latest improvement in the activity data to prove short-lived,” Julian said.

Nomura’s Zhao said strong export growth could be short-lived as escalating trade tensions between China and U.S. bode ill for the outlook.