By Qu Yunxu and Jason Tan 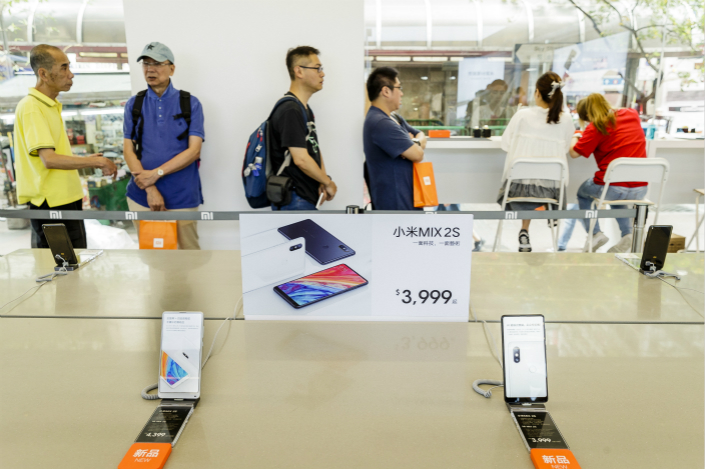 Smartphones are displayed at a Xiaomi store on Nathan Road, Hong Kong on May 7. Photo: VCG

Chinese smartphone-maker Xiaomi Corp. has acknowledged that it will continue to hemorrhage cash in the near term as it ramps up investment in technology, new products and services, as well as its global expansion.

The world’s No. 4 smartphone-maker posted a net loss of 7 billion yuan ($1.1 billion) during the first quarter, according to its draft prospectus issued on Monday to the regulator in what could be the first offering of Chinese depositary receipts (CDRs). Xiaomi had a net loss of 43.9 billion yuan for the whole of 2017.

“We can’t guarantee that we will create profitability in the future,” the prospectus said. “If we can’t maintain or increase operating margins, we may continue to post losses.”

China has launched the first-of-its-kind CDR program, aiming to lure Chinese companies listed abroad to return home for listings to buoy the market.

The program allows select companies to bypass legal and technical barriers to A-share listing on the mainland, such as restrictions on weighted voting rights and mandatory requirements on profitability. This will make it possible for companies like Xiaomi to simultaneously proceed with its planned dual listings in Hong Kong and on the mainland.

In the draft prospectus, Xiaomi has named Citic Securities Co. Ltd. as its underwriter and sponsor, and it will float shares in Shanghai.

It didn’t disclose how much it aims to raise, how many shares it will issue or their price range. But a source close to the matter told Caixin, that the company is expected to raise around $5 billion by issuing no more than 7% of its total share count of 2 billion.

Xiaomi is planning to raise another $5 billion in Hong Kong in its initial public offering (IPO) by the end of this month, about the same time as its CDR issuance, Caixin has learned.

The prospectus also said the phone-maker is spinning off its finance unit through the issue of stock incentives to CEO Lei Jun and Xiaomi finance’s management team.

The unit offers online loans, insurance and payment, as well as financing for so-called supply-chain partners that make products other than smartphones under the Xiaomi brand. During the first quarter, the unit accounted for nearly 14% of Xiaomi’s total assets, and 1% of its revenue.

Separately, sources told Caixin that Baidu Inc. is set to be the first overseas listed company (link in Chinese) to join the CDR craze.