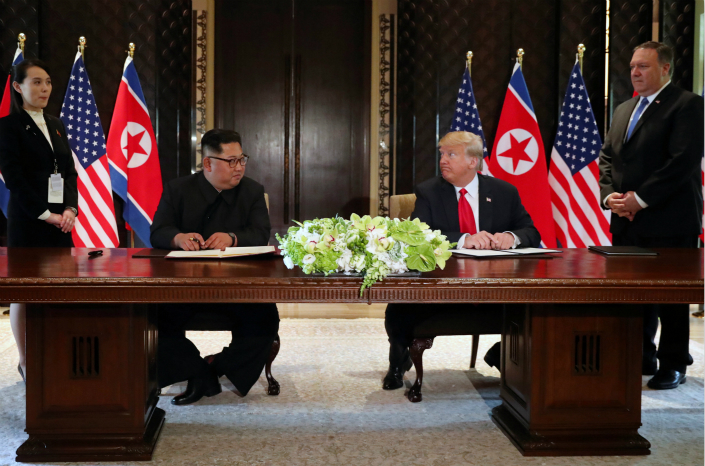 North Korean leader Kim Jong Un and U.S. President Donald Trump prepare to sign documents that acknowledge the progress of their talks after their summit at the Capella Hotel in Singapore on Tuesday. Photo: VCG

* In joint statement, U.S. and North Korea promise to work together to “build a lasting and stable peace regime on the Korean Peninsula”

(Beijing) — Beijing voiced its support for the historic Tuesday summit between U.S. President Donald Trump and North Korean leader Kim Jong Un, saying that dialogue is the only way to end the nearly seven-decade conflict between the two countries.

Chinese Foreign Minister Wang Yi said the core of the conflict between the two sides is security concerns that the U.S. and North Korea need to resolve through equal dialogue. Speaking during a meeting with ASEAN Secretary-General Lim Jock Hoi in Beijing on Tuesday, Wang said, “China has been working for nearly 20 years in helping with this process.”

Earlier in the day, Wang was quoted by China Central Television on one of its social media accounts as saying: “History has been made as leaders of both countries could sit together to engage in equal dialogue. China both welcomes and supports that. The issues that are needed to resolve (the conflict) include both the realization of a comprehensive denuclearization and a peaceful mechanism to address North Korea’s legitimate security concerns.”

Trump and Kim met face-to-face Tuesday morning at Singapore’s Capella Hotel on the resort island of Sentosa, marking the first meeting between a sitting U.S. president and a North Korean leader. The two were also seen at a working lunch together after the highly anticipated event.

The U.S. is closely allied with South Korea, which technically remains at war with the North because the 1950-53 Korean War ended with an armistice, not a peace treaty.

China, a long-time ally and neighbor of North Korea, watched the meeting closely, along with South Korea and Japan, following a thaw in relations between the North and U.S. in April. That thaw abruptly reversed months of growing tensions between Washington and Pyongyang, marked by threats of war from both.

The U.S and China both want to see North Korea, officially known as the Democratic People’s Republic of Korea (DPRK), give up its nuclear weapons program.

In a four-point joint statement released after the meeting, the two leaders said both countries “commit to establish new U.S.-DPRK relations in accordance with the desire of the peoples of the two countries for peace and prosperity. … The United States and the DPRK will join their efforts to build a lasting and stable peace regime on the Korean Peninsula,” according to the document.”

As North Korea’s closest ally, China made its presence felt at the bilateral meeting by providing a chartered jet from Air China, one of China’s top three carriers, to bring Kim to Singapore. China supplied the plane at the request of North Korea, a Chinese Foreign Ministry spokesman said during a regular briefing Monday.