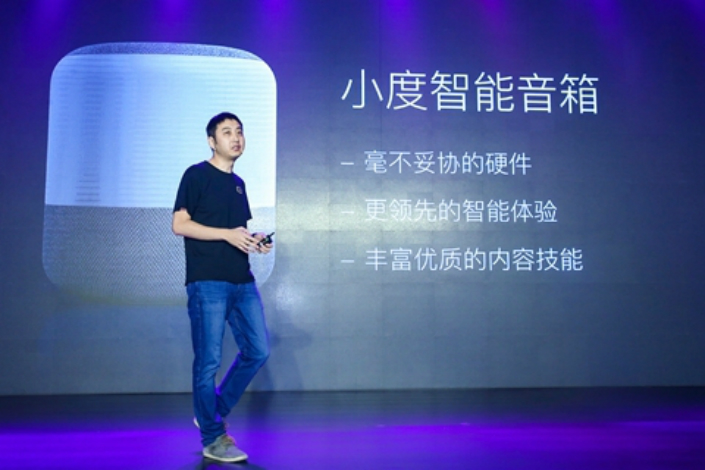 Baidu Inc.’s latest smart speaker now comes with a promotional price tag of just 89 yuan ($14), as it ramps up its hardware offerings to give a further boost to its burgeoning artificial intelligence (AI) business.

The internet giant has decided to pour cash into promoting its third smart speaker model, called Xiaodu, which has a normal sticker price of 249 yuan. The company has not said how long this promotion will last.

Baidu has diversified into AI, including the voice activation system DuerOS, cloud computing and autonomous driving, after its major source of revenue — online advertisement — took a hit in a 2016 scandal.

Baidu, a relative latecomer to the smart speaker scene, debuted its first voice-activated speaker in November, at 1,699 yuan, and second in March, at 599 yuan. The latest gadget can play more than 7,000 music tags to fit different scenarios or moods, and has a child mode for interactions with kids.

Ignited by the 2014 debut of Amazon Inc.’s Echo, the global craze for smart speakers shows no sign of slowing. Equipped with voice-based AI systems, the portable speakers respond to users’ verbal orders to play music, read news, report the weather and provide other services. Analysts expect smart speakers to become a ubiquitous part of daily life and the hub for people to control all kinds of devices, including televisions, air conditioners and automobiles, by voice command.

China is currently the second-largest market for the speakers after the U.S., according to a report by Singapore-based market analyst Canalys.

In the first three months this year, smart speaker shipments in China totaled 1.8 million units, up almost fifty-fivefold from the same period last year. For all of this year, Canalys projected that smart speaker sales in the country would reach 4.4 million and 38.4 million in the U.S.

This story has been corrected to state that China's annual online sale bonanza takes place in November.