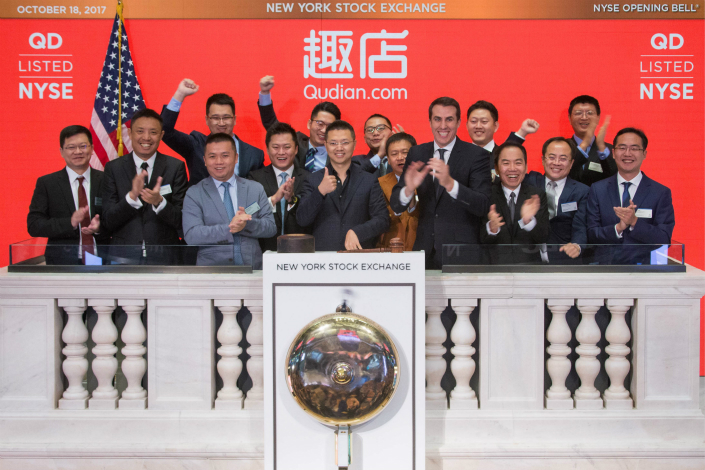 Several of Qudian Inc.’s shareholders have cashed out since the Chinese cash-loan company posted worse-than-expected financial results for the first quarter, as regulators rein in China’s nascent online lending industry.

Kunlun Tech Co. Ltd., the second-largest shareholder of the Chinese peer-to-peer (P2P) lending platform, has locked in 123 million yuan ($19.21 million) in profit after selling 2.55 million shares of the New York-listed Qudian for $8.85 per share, according to statement that Kunlun issued earlier this month.

After the sale, Kunlun still holds about 53.1 million shares in Qudian. Kunlun has cashed in about 500 million yuan worth of Qudian shares in three separate sales, including the latest. The two previous sales followed Qudian’s $900 million initial public offering (IPO) on the New York Stock Exchange in October, when the stock was trading at $24 per share.

Kunlun said the sale was favorable to its investors as Qudian posted worse-than-expected results in its first-quarter financial report. The proceeds from the stock sale accounted for 12% of Kunlun’s net profit in 2017.

On May 21, Qudian’s stock fell more than 13% after the company reported its net profit plunged 32% year-on-year to 316 million yuan in the first quarter, when online lending platform’s number of active borrowers plunged 14% to 4.1 million.

Qudian’s stock was highly sought-after following its IPO, which was the largest such offering in New York for a new group of Chinese financial technology companies.

Phoenix Partners, an investment fund for Internet startups, which is affiliated with Phoenix Fortune, had also unloaded 1.39 million shares in Qudian. At present, Phoenix Partners still holds a 17.25% stake. On May 31, Shenzhen-listed Guo Sheng Financial holdings, controlled by Phoenix Fortune, said it will sell its 14.2 million shares in Qudian over the next two years, depending on market conditions.