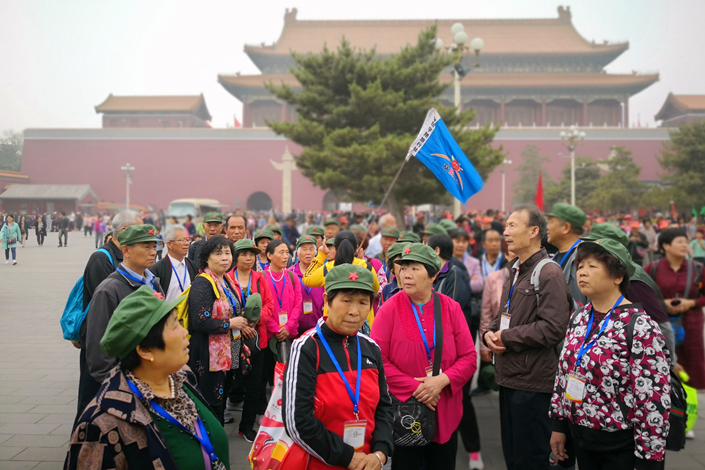 A tour group of senior citizens visit in the Forbidden City in Beijing on May 12. Photo: Deng Jing

China has decided to pull money from provincial-level pension funds to create a national pool to address growing pension deficits in poorer regions.

The central government said this centrally controlled pool will balance the pension-fund burdens across the country and strengthen the overall pension system.

The change comes at a time when China is facing a looming demographic crisis because of its rapidly aging population and alarmingly low birth rate. At the end of 2017, China had 241 million people over the age of 60, who accounted for 17.3% of the country’s 1.4 billion population, according to the official Xinhua News Agency.

In 2017, China’s pension funds collected 3.3 trillion yuan ($515 billion) and handed out 2.9 trillion yuan in payments. As of the end of last year, the funds had an aggregate surplus of 4.1 trillion yuan. However, two-thirds of the surplus belonged to seven provincial-level areas, including Guangdong and Beijing.

The central fund will allow the government to create a pool from the pension surpluses of richer provincial-level areas to ensure that the poor regions can meet their pension obligations. If a local government failed to meet these obligations, it would be a big problem because so many retirees depend heavily on government pensions to survive.

Currently, provincial-level governments each fund their own pension funds by taxing workers’ wages. Some regions, such as Heilongjiang province, in China’s northeastern rust belt, are running pension deficits due to declining contributions from a net outflow of young workers who are frustrated by an ailing local economy.

Although every provincial-level area will have to contribute to the new fund, some will receive more than they contribute, You Jun, vice minister of Human Resources and Social Security of China, was cited by the Beijing News as saying.

The new fund will be able to collect around 400 billion yuan a year, according to Caixin’s calculation based on official data about the weighted average salary of urban workers.