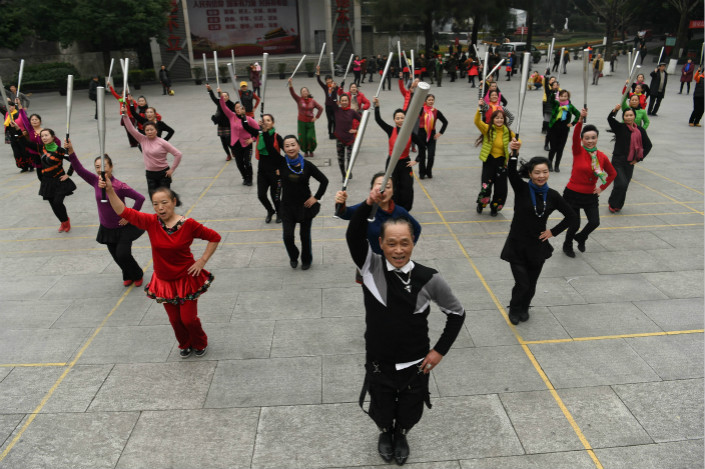 Seniors dance in Shaping Park in the southwestern city of Chongqing on Jan. 12. Photo: VCG

A long-awaited central adjustment fund will be set up this year to help out regions struggling with their pension burden, Premier Li Keqiang said at an annual news conference Tuesday.

Li, speaking as the annual meeting of the country’s legislature came to a close, said that 3% of provincial social security funds would be taken in at first for redistribution to provincial-level regions in need. The proportion taken will increase over time, he added.

China’s pension funds are controlled by provincial-level governments, and some have a much tougher time than others in supporting their rapidly aging populations. The pension fund of the northeastern rust-belt province of Heilongjiang had a deficit of over 23.2 billion yuan ($3.66 billion) in 2016, official reports revealed last year.

An adjustment fund has been long discussed as a way to address the huge imbalances between China’s poorer and wealthier provinces. Such a fund is essential to bring the fragmented pension systems together at the central level, demographics expert Zheng Gongcheng told the official People’s Daily earlier this month.

As of the end of 2017, 240 million Chinese nationals were over 60, accounting for 17.3% of the total population, Zheng said at a news conference last week. China’s total number of elder-care facilities increased by over 220% from the end of 2012 to September 2017, according to official statistics cited by the official Xinhua News Agency.

Some provinces are suffering from downward economic pressure and declining fiscal revenues, Li said. The overall picture is positive, according to the premier, who said that last year’s overall pension balance was 4.1 trillion yuan, and the National Council for Social Security Fund (SSF), a central fund set up to cope with potential pension deficits, grew to 1.8 trillion yuan.

But as provinces do not transfer funds to each other, the overall size of the country’s pension pot does not reveal just how much some regions are struggling.

Proceeds from state-owned asset transfers will also be used to increase SSF profits, Li said. A pilot program launched in November required several state-owned enterprises to transfer 10% of their shares to the SSF and asset management firms set up by provincial governments.

The SSF is also shifting to a more market-driven management model, as it has been moved under the Ministry of Finance as part of a sweeping government overhaul.

“People should feel full of confidence in the future ... if the elderly have worked hard all their lives and are not looked after, then people will lose faith,” Li said.