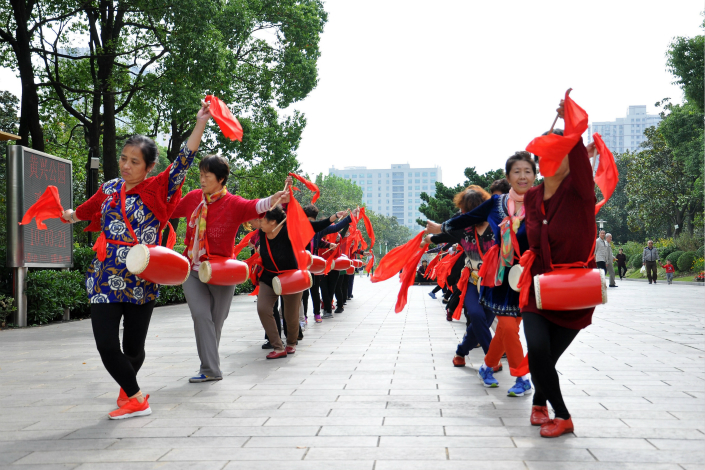 Analysts estimate that the state-owned enterprise shares transferred to government bodies in the recent pilot pension project could be worth as much as 4 trillion yuan ($603 billion). In the picture above, retirees dance in a Shanghai park in October. Photo: Visual China

A pilot program for state-owned enterprises (SOEs) to transfer a portion of their shares to the national pension fund is China’s latest attempt to bolster its social insurance system as the country grapples with a rapidly aging population.

China’s basic pension insurance fund is a crucial part of the country’s social insurance system as it covers more than 375 million urban and township employees.

Last week, the State Council, China’s cabinet, issued a document requiring several SOEs administrated by central and provincial governments to transfer 10% of their shares to the National Council for Social Security Fund and asset management firms created and wholly owned by the provincial governments.

Analysts from China International Capital Corp. estimated that the transfers could add up to 4 trillion yuan, according to the 21st Business Herald.

The pilot program will involve three to five SOEs and two financial institutions under direct control of the central government, according to the State Council’s document.

It is difficult to estimate the value of such a transfer if all Chinese SOEs participate, but it will be unprecedented, said Dong Dengxin, director of the Institute of Finance and Securities at Wuhan University of Science & Technology. “The transfer of shares is for real this time,” Dong said.

It’s not the first time that China has tried to tap state-owned assets to support the country’s basic pension system.

In October 2001, the State Council called off a similar program after trading of stated-owned firms’ shares took a toll on these assets when the stock market took a dive in June that year, experts said.

The concern over the government pension funds comes as China is weathering a demographic crisis, at least in part due to the effects of the three-decade-old one-child rule, which left the country with a rapidly aging population. At the end of 2016, China had 230 million people over the age of 60, who made up 16.7% of its population of 1.4 billion.

The expansion of the elderly population will continue for the foreseeable future, Yi Weimin, China’s minister of Human Resources and Social Security, said at a news conference in October.

Zheng Gongcheng, an expert in demographics, said China’s elderly population is expected to reach 400 million in 2035, according to a report last month by the Russian news agency TASS.

The pressure on China’s national health care and social security systems has continued to mount since 2000, when the country’s demographics began to shift, Zheng said.

The State Council and provincial asset management firms that receive the SOE shares will be able to benefit from the corporate dividends, but will be barred from trading them for three years. They will also only be allowed to use the shares to make investments after receiving approval from the central government.

However, hard-up provinces such as Heilongjiang might not be bound by the three-year lock-up period. Heilongjiang, in the belly of China’s northeastern rust belt, doesn’t have sufficient funds to cover its current pension payments, Dong said. “It has to cash out (the province’s state assets), because the provincial government coffers can’t handle the pension payments anymore,” he added.

By 2016, Heilongjiang had has already run out of funds to cover its pension payments. Its pension fund now has a deficit of 23.2 billion yuan, according to official figures.

For more affluent provinces with overfunded pensions, the three-year lock-up is “not a problem at all,” Dong said.

For these richer provinces, the dividends generated from the shares can be used to fill a funding gap if payment obligations overtake pension fund revenue at some point.