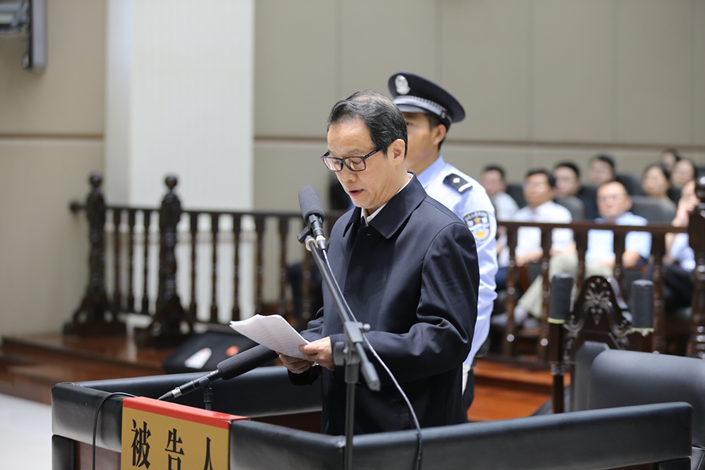 Prosecutors said Xiang Junbo took advantage of his positions at the Agricultural Bank of China and the CIRC to offer help to companies and individuals over loan and project approval in exchange for about 19.42 million yuan ($3.03 million) in bribes.

Xinhua did not say which specific charge or charges Xiang pleaded guilty to, or how much in bribes he admitted to accepting.

Xinhua said Xiang expressed his remorse during the trial, attended by more than 60 people from both political sphere and the media. The court said it will announce the sentence at a later date.

Xiang, a veteran of the Sino-Vietnam War of 1979, was put under Communist Party investigation in April 2017, six years after assuming the helm of the CIRC. His name was removed from the CIRC website a day later, and he was expelled from the Communist Party five months after that. The party’s anti-graft watchdog said he “seriously violated political discipline and political rules.”

The CIRC last year intensified a crackdown on the insurance industry that began in 2016 to rein in institutions’ risky and irregular activities that posed risks to the stability of the financial system. The CIRC has since been absorbed into the newly created China Banking and Insurance Regulatory Commission.

Some voiced sympathy for Xiang after he was investigated as he was considered to have contributed much to the advancement of the insurance industry in China, which was seen as a lagging sector in the Chinese financial market.