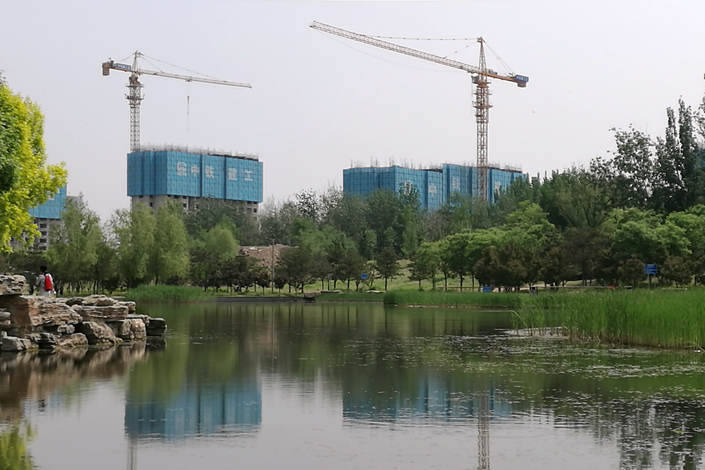 The across-the-board slowdown, which economists say is partly due to the government’s campaign to control corporate and financial sector debt, has raised expectations that the authorities may begin to moderate policy easing especially as the central bank did not raise market interest rates on Thursday in the wake of the U.S. Federal Reserve’s decision overnight to increase its benchmark rate.

Fixed-asset investment excluding rural households, a key driver of domestic demand, rose 6.1% year on year in the January-May period, slowing from a 7% pace in the first four months, according to data released by the National Bureau of Statistics (NBS). The increase trailed the median estimate of 7% in a Bloomberg News survey of economists, and marked the weakest growth since the data series was first released in February 1998.

Government-driven infrastructure investment, which comprises spending on the construction of roads, railways and other public facilities — though not those for electricity, heating, gas and the water supply — gained 9.4% in the first five months of the year, slowing sharply from 12.4% in the January-April period, and marking the fifth straight month of deceleration.

The continued slowdown in infrastructure investment comes as the central government has tightened control over public-private partnership projects, which were designed to attract private capital to fund construction projects like roads, bridges and hospitals to ease financial pressure on cash-strapped local authorities. A crackdown on banks’ off-balance-sheet activities such as “shadow banking” and wealth management products has also limited the ability of local government financing vehicles, the main source of non-budget funding for local authorities, to raise money.

NBS spokesman Mao Shengyong told a news briefing that he expected pressure on infrastructure investment to continue, and echoed comments made by other bureau officials who have said that a slowdown is normal following years of rapid growth.

The bright spot in the investment picture was real estate, another driver of economic activity. Although investment in residential property development, which accounts for the bulk of real estate spending, grew at the same pace as in the first four months, at 14.2%, several leading indicators picked up.

Value-added industrial output, which measures production at factories, mines and the utilities sector, rose 6.8% year on year in May, slightly down from an increase of 7% in April and lower than the median economist forecast of 7%.

Growth in retail sales, which include spending by households, businesses and government departments, slowed sharply to 8.5% year-on-year in May from 9.4% in April, the weakest increase since June 2003, according to NBS data, and trailing the 9.6% median estimate in Bloomberg’s survey of economists.

Macquarie Capital Ltd. analysts Larry Hu and Irene Wu attributed the slowdown partly to weaker automobile sales as consumers held off purchases ahead of a tariff cut on imported cars due to take effect on July 1. They also noted strong property sales over the past two years may have crowded out other consumer spending.

HSBC’s Wang said the weaker-than-expected retail sales data should not be a worry, pointing out that the rapid shift in China’s consumption patterns, especially the continued expansion of e-commerce and services consumption, means that the current measures of goods sales will become less relevant in gauging consumption strength.

Economists had been expecting the People’s Bank of China (PBOC) to immediately follow the Fed’s well-flagged rate hike on Wednesday local time with an increase in its own interbank market interest rates, as it did in March and December.

But the central bank stayed put on Thursday, a signal taken by the market that concern about the slowdown in growth, along with the potential for a trade war with the U.S. and the impact of the government’s deleveraging campaign, had led it to soften its stance.

“(T)he signal is loud and clear. The central bank is worried that market risks would escalate,” Iris Pang, an economist with ING Bank N.V., wrote in a note.

The chances of a targeted cut in the reserve requirement ratio for banks to offer loans to small and midsize enterprises (SMEs) are growing, said Pang. As tightening measures would continue to be in place for the financial deleveraging reform, the central bank does not want to add pressure on SMEs, which are already finding it difficult to get credit from banks, she said.