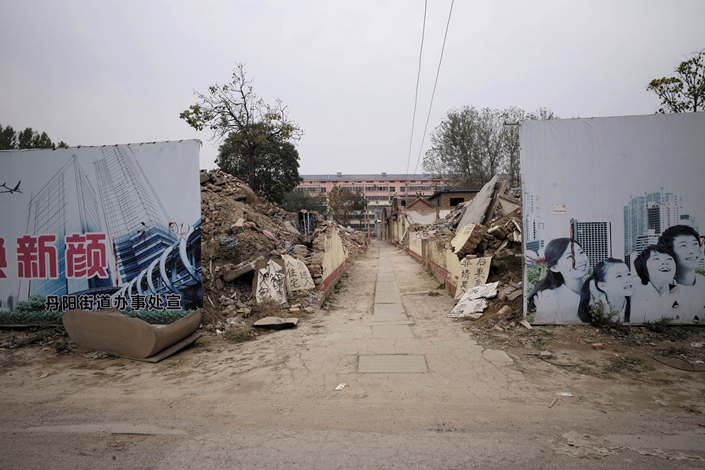 China Development Bank (CDB) says that while some local governments have gotten more cautious about taking on debt to support shantytown redevelopment projects, the policy lender has not halted loans to support them, contradicting multiple media reports.

“China Development Bank has been strictly implementing the country’s policies on shantytown renovations,” the bank said in a statement to Caixin on Monday.

As of the end of May, CDB has provided 436.9 billion yuan ($66.2 billion) in loans to support redevelopments slated for this year for 5.8 million homes, data from the bank shows.

Some localities have halted investments in shantytown renovations because of central government limits on local debt, sources from the CDB told Caixin. But the bank has not — as media reports have suggested — halted pledged supplementary lending (PSL) to support shantytown redevelopments, the sources told Caixin.

PSL is a way for the central bank to inject money into the economy by providing long-term loans to policy banks for specific purposes such as agriculture or shantytown redevelopment. The monetary policy tool has been growing in popularity, with calculations from a securities firm Caixin spoke with showing that new PSL so far this year has already reached 80% of the whole-year figure for 2017.

Money used by local governments for shantytown redevelopments comes from four channels. The majority of the funding comes from the central bank’s loans to policy banks such as CDB and the Agricultural Development Bank of China. PSL accounts for around 80% of shantytown project funding from policy banks. Redevelopments are also funded by loans from commercial banks and local government bonds, while a negligible amount also comes from the Ministry of Finance.

So far this year, the housing market in first-tier cities has been cooling, but third- and fourth-tier cities have been experiencing a surge. One of the core reasons is a three-year plan for shantytown redevelopment that began in 2015, which proposed the reconstruction of 18 million new homes. A second phase of this plan was introduced in the government work report delivered in March by Premier Li Keqiang, with the aim of redeveloping 15 million homes between 2018 and 2020.

In June 2015, the State Council issued a document that allowed monetary compensation for displaced residents to take priority over local governments providing new homes in shantytown redevelopment projects. Monetary compensation grew to represent 60% of all compensation for redevelopments in 2017, up from 48.5% in 2016 and 9% in 2014. This trend, which puts more money into the housing market rather than increasing housing stock, has been pushing up house prices.

There is still some debate over whether spending on shantytown development should be counted within the government debt cap, and so while some more cautious localities are reining in their spending, others are still supporting shantytown redevelopments, a CDB source told Caixin.