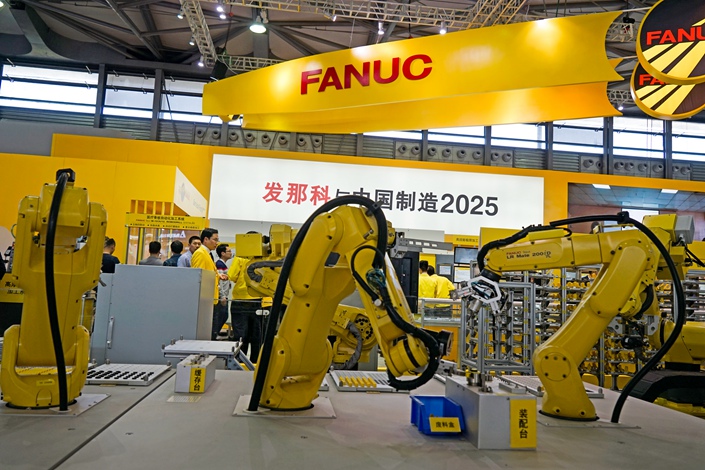 The MasterCard Caixin BBD China New Economy Index (NEI) fell to 29.2 from 29.6 in May. Photo: VCG

A private index that uses big data to gauge China’s new economy dipped to its lowest reading since May 2017, dragged down by decreasing capital inputs.

The MasterCard Caixin BBD China New Economy Index (NEI) fell to 29.2 from 29.6 in May, indicating that new economy industries accounted for 29.2% of total economic inputs used to make goods and services in June.

The decline echoes results of the Caixin China General Manufacturing PMI, which gauges sentiment among manufacturing executives. That index slowed marginally to 51 in June, versus 51.1 in May. Anything above 50 means improvement.

Zhong Zhengsheng, chief economist with Caixin’s think tank, said that manufacturing in China will face more headwinds as trade tensions with the U.S. cloud the outlook for exports, coupled with other factors such as a weaker job market, growing inflationary pressures and a slower cash return among manufacturers.

The NEI, launched in March 2016, defines a “new economy” industry as one that is labor- and technology-intensive — but has a relatively low ratio of fixed capital — and features sustainable and rapid growth. The definition also includes strategic new industries that the government is encouraging.

For years, China has sought to transition its economy to one driven by services and technology-intensive sectors rather than export-oriented manufacturing.

The NEI measures labor, capital and technology inputs in 10 emerging industries relative to those used by all industries. The technology input sub-index, which has fluctuated widely since October 2017, stood at 27.4 in June, a decrease of 2.9 points from the previous month. Capital investment, which has been falling since March, rebounded by one point to 32.0 in June. The labor input sub-index dropped to 27.8 in June, down by 0.1 point from May.

The monthly entry-level salary for new-economy jobs, compiled from online career website listings, was 10,369 yuan ($1,560) per month in June, down from 10,444 yuan in May, according to a report compiled by research firm BBD and the Caixin Insight Group, Caixin Media’s financial data and analysis platform.

Hiring in new-economy sectors accounted for 27.25% of all hiring in June, down slightly from 27.3% in May.

Between December 2017 and June 2018, China’s southern province of Guangzhou ranked first by average NEI, followed by Beijing, Shanghai, Hangzhou and Nanjing, according to the report.