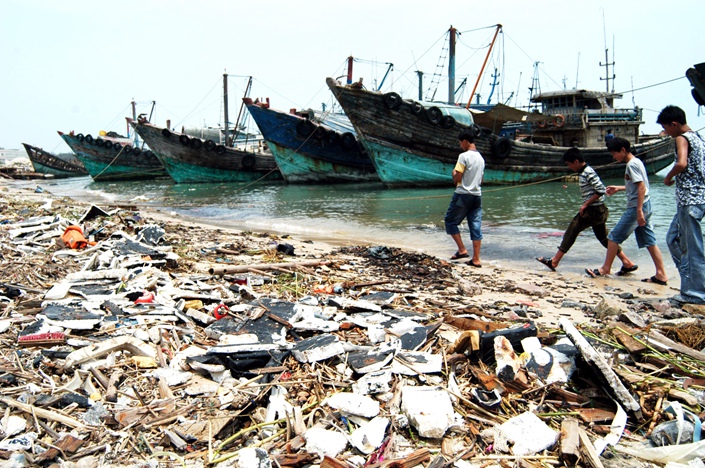 Garbage is strewn across a beach in Shishi, Fujian province, in June 2014. Photo: VCG

Five people have been ordered to pay more than 7 million yuan ($1.1 million) for dumping waste into an estuary in southern China, in what is believed to be the country’s first-ever public-interest lawsuit to punish ocean polluters.

The case involved workers paid by a paper mill in the industrial city of Dongguan, Guangdong province, in 2016 to dispose of refuse, which was then dumped into in a shipping lane just off the coast.

Inspectors from the Zhongshan Oceanic and Fishery Administration uncovered the violation during a routine inspection in August 2016 and subsequently alerted police.

An evaluation by the South China Institute of Environmental Sciences, under the Ministry of Ecology and Environment, concluded that the waste contaminated the soil and water, and that damage to marine life could lead to heavy losses for the fishery industry and pose health hazards for people exposed to contaminated seafood.

At the Zhongshan prosecutor’s behest, the Oceanic and Fishery Administration sued the workers in the Guangzhou Maritime Court in December 2016, using the “public interest” as the plaintiff.

The administration demanded 3.5 million yuan from the four workers for environmental damage and another 3.7 million yuan to cover the cleanup cost, court documents show. A ship owner charged with helping transport the waste — including 800 cubic meters (28,300 cubic feet) of used adhesive tape — was ordered to pay 690,000 yuan.

The illicit disposal of solid waste, often done to evade treatment costs, remains rampant in China because few have been held accountable. The issue was underscored by a highly publicized case in Shanghai in 2013 in which thousands of dead pigs were found floating in the Huangpu river, a tributary of the Yangtze River, after they had been dumped miles upstream by farmers.

In June, China’s Civil Procedure Law and Administrative Litigation Law was updated, allowing the use of the public interest as a plaintiff. Since then, a growing number of government and non-governmental organizations have used the tool to take on polluters.

The five were sentenced to between 39 and 43 months in jail in a criminal case in January, according to the government-run Zhongshan Daily.