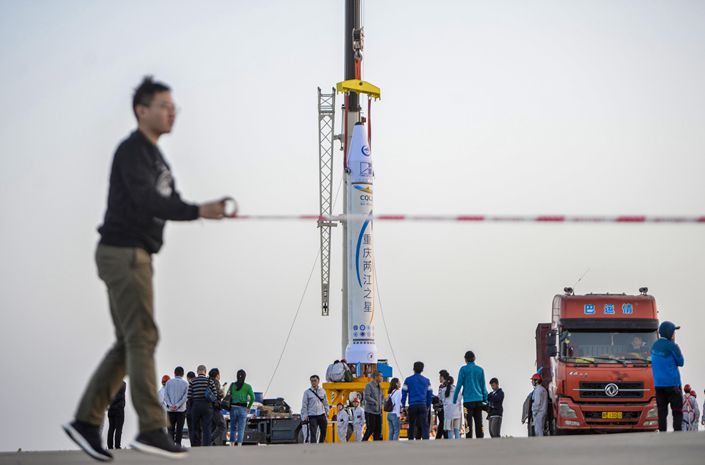 A young rocket startup said it has received financing worth 600 million yuan ($90.6 million) within a year, as China hopes to send its space industry into orbit in the coming years.

The startup, iSpace, which was set up in 2016 and has been operational since August, said in a statement (link in Chinese) on Sunday it obtained new capital in a Series A funding from investors led by Matrix Partners China, the local affiliate of the U.S. venture capital fund that has invested in technology companies such as search giant Baidu Inc. and ride-hailing operator Didi Chuxing.

The statement didn’t disclose the value of the latest funding round, but said it has successfully raised 600 million yuan to date, involving more than 10 parties, including Citic Juxin Co., Fosun Group, Shunwei Capital Partners and Shuairan Investment Management.

The space industry was the sole domain of state-owned research agencies and the military until 2014, when China allowed private companies to build and launch satellites, putting them in a position to begin to take on U.S. rivals SpaceX and Blue Origin LLC.

The government has set the goal of building the country into a “space flight superpower,” and aims to have a permanently manned space station in orbit by about 2022.

ISpace and rival OneSpace, both Beijing-based, launched their first rockets within a span of two months this year, each claiming theirs was China’s “first rocket developed by a private firm.”

ISpace said the new financing will be mainly used to fund the research and development of launchers and engines, as well as the construction of final assembly bases and workers’ training.

The company reveals little of its background on its official website, but said it is committed to creating “high-quality, low-cost, fast-responding” commercial launchers to serve microsatellite manufacturers, operators, research institutes and universities at home and abroad.

It has two research centers, one in Beijing and one in Xi’an, capital of the northwestern province of Shaanxi, according to a news release from the company. One of its financial backers, Shunwei Capital, is an investment firm founded by Xiaomi Corp. co-founder and CEO Lei Jun.

Founded in 2015, OneSpace signed a deal with state-run Chongqing Liangjiang Aviation Industry Investment Group last year to build a joint research and manufacturing base in the southwestern city of Chongqing.

Howard Liu contributed to this report.