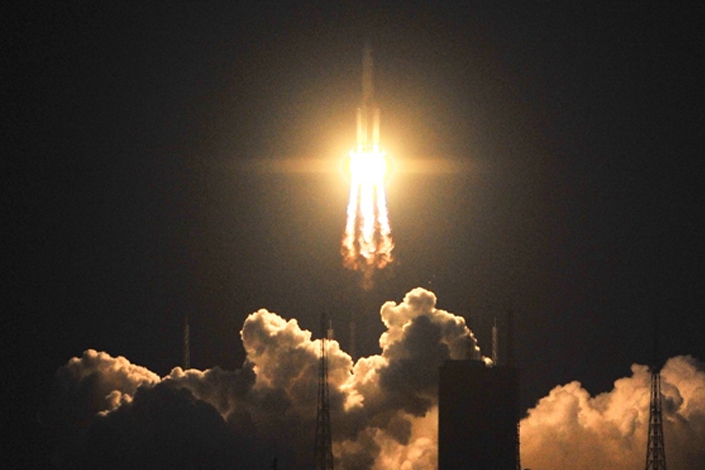 A rocket carrying China’s heaviest satellite failed midflight after its launch on Sunday, casting a cloud over the large-load carriers’ role in deploying the Chang’e-5 lunar probe later this year.

The Long March-5 Y2 rocket, which blasted off from the Wenchang Space Launch Center in Hainan province on Sunday evening, was carrying the Shijian-18, a 7.5-ton satellite designed for telecommunications experiments.

After the launch, “an anomaly occurred during the flight of the rocket,” the official Xinhua News Agency reported. The rocket failed to enter orbit.

Long March-5 rockets are China’s latest generation of heavy-lift carriers, with double the capacity of their predecessors, the Long March-4 series. A Long March-5 rocket is expected to carry the Chang’e-5 lunar probe into space later this year, according to the State Administration of Science, Technology and Industry for National Defense.

The space administration did not say if Sunday’s launch failure will affect plans for the Chang’e launch.

Chang’e-5 will be China’s first mission to collect lunar surface samples, and the world’s first such mission since the then-Soviet Union’s Luna 24 mission in 1976.

Sunday’s launch was Long March-5’s second mission, after the first of the heavy-lift carrier rocket series took flight in November.

The previous Long March-5 rocket carried the Shijian-17 satellite, which is testing a new ion thruster developed by researchers in Harbin, Heilongjiang province.

The journey has not been without setbacks, however. The Zhongxing-9A satellite, carried onboard a Long March-3B carrier rocket in June, failed to enter its preset orbit due to an abnormal performance during the third phase of its rocket launch, the China Aerospace Science and Technology Corp. said.