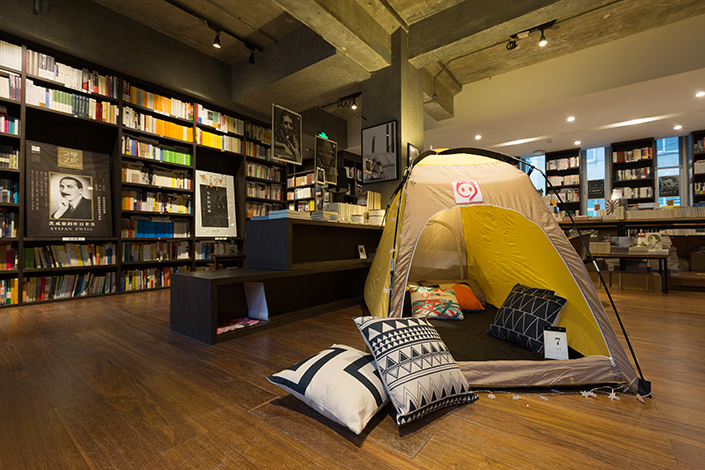 Home-sharing firm Xiaozhu operates a special project for users to stay in bookstores in Beijing. The firm has been in talks with rival letting service Airbnb. Photo: Xiaozhu

(Beijing) — Home-sharing service Airbnb and its major Chinese rival Xiaozhu met last year to discuss working together, but the meetings didn’t lead to any deals or partnerships, a Xiaozhu executive told Caixin.

Since late 2016, media reports have been circulating that the two companies were in talks about a possible merger or acquisition deal.

Xiaozhu Vice President Pan Caifu acknowledged in an interview Wednesday that the meetings with Airbnb took place, but said they didn’t lead to anything concrete. “But nothing is impossible in the future,” he added.

Currently, Airbnb has around 80,000 rooms listed in China. In comparison, its Chinese competitor has more than 200,000 rooms listed on its platform and is currently adding an average of 1,000 listings a day, according to Xiaozhu.

Xiaozhu’s advantage lies in a larger local staff, Pan said. The company has more than 280 staff members in its on-the-ground service teams across 16 cities, while Airbnb has only a dozen in its Beijing office — although it plans to triple employee numbers this year.

Despite this, China’s home-sharing industry was not as developed as the ride hailing sector, Pan said, and none of the domestic operators have grown large enough to begin acquiring or merging with their competitors.

When Xiaozhu was founded in 2012, the concept of the sharing economy was still new in China. As digital payments and a credit rating system developed in the country, and other industries such as ride-hailing and bike sharing took off, the idea of renting out a spare room became acceptable.

However, having been a host on both the Xiaozhu and Airbnb platforms, Pan found that Airbnb lodgers behaved better than those on Xiaozhu, which targets Chinese users. “Airbnb users are either foreigners or people who have studied or worked overseas,” Pan said.

There have been more cases of Xiaozhu users messing up rooms or stealing from shared apartments, Pan said.

Xiaozhu has raised nearly $200 million from investors such as Citic Capital Holdings Ltd. and Bertelsmann Asia Investments, but the company has yet to turn a profit, Pan said.

“Making a profit is not our priority now. We have been investing our income to expand further,” he said.

Xiaozhu started another round of fundraising and plans to establish service teams on the ground in more cities, Pan said.