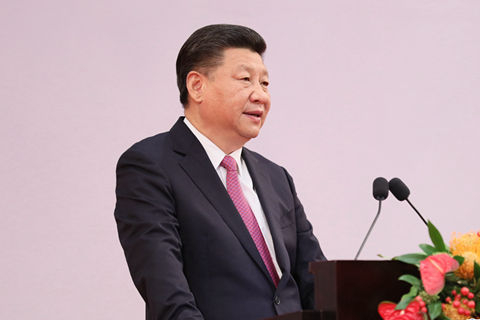 President Xi Jinping issued a stern warning over any challenges to Beijing’s authority over Hong Kong, as he spoke at a ceremony Saturday marking the 20th anniversary of Hong Kong’s return to China.

"Any attempt to endanger national sovereignty and security, challenge the power of the central government and the authority of the Basic Law of the (Hong Kong Special Administrative Region) or use Hong Kong to carry out infiltration and sabotage activities against the mainland is an act that crosses the red line, and is absolutely impermissible," Xi said in a speech to some 2,000 dignitaries and guests at the Hong Kong Convention and Exhibition Centre.

"That allows Hong Kong to made headway in its interaction with the rest of the world and in its international influence," he added.

Addressing the people of Hong Kong, Xi said the central government is open to discussions with anyone who upholds the "one country, two systems" guideline, regardless of their political affiliation and conviction.

Xi said that it is normal for people to disagree, and even oppose to each other, in a community like Hong Kong that cherishes diversity. But the tendency to make everything a political issue in Hong Kong could get in the way of its social and economic development, he warned.Xi, who arrived in Hong Kong on Thursday, also inaugurated the new Hong Kong administration led by Carrie Lam.

In her inaugural speech, Lam pledged to repay the trust and support of both the people of Hong Kong and the central government in Beijing “with diligence and achievements.”

Lam vowed to do whatever it takes to uphold the “one country, two systems” principle, the law, and promotion of a deep and positive relationship between the central government and Hong Kong.

“I will, as I always have, rise to these challenges, and take firm legal actions against any acts that will undermine the country’s sovereignty, security and development interests,” Lam said.

On Friday, China Foreign Ministry spokesman Lu Kang dismissed the arrangements of the Sino-British Joint Declaration of 1997 as “history and of no practical significance, nor are they binding on the administration for today's central government of China over the Hong Kong SAR.”

He added, “The British side has no sovereignty, no power to rule and supervise Hong Kong after the handover. It is hoped that relevant people will come around to this.”