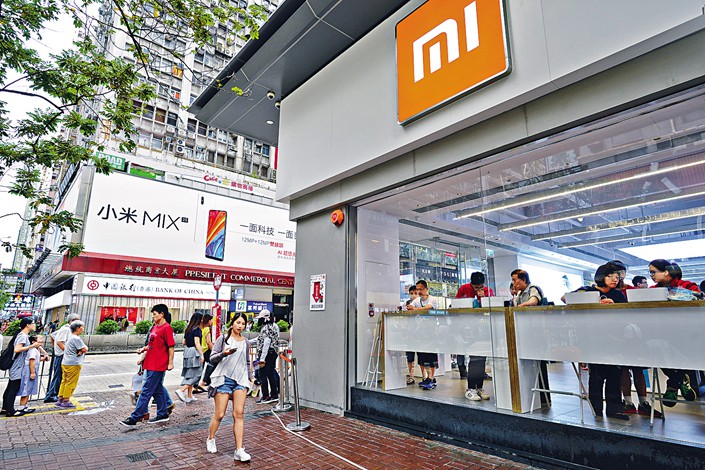 Pedestrians walk past a Xiaomi store in Hong Kong on June 16. Photo: IC

Xiaomi Corp.’s shares were drawing bids as much as 10% below their initial public offering (IPO) price in the gray market, Caixin has learned, pointing to lukewarm investor interest and casting uncertainty over the company’s trading debut on Monday.

The weak gray market activity came as the world’s fourth-largest smartphone-maker said Friday its shares have been 9.5 times oversubscribed, and confirmed its listing price at HK$17 ($2.17), representing the bottom of its previously announced range, according to a filing with the Hong Kong stock exchange.

“If prices in the gray market are down between 5% and 10% before the listing, the first-day performance would take a hit for sure,” Alvin Cheung, associate director at Prudential Brokerage Ltd. in Hong Kong, told Caixin. “With trade tensions between China and the U.S. dampening market sentiment, Xiaomi’s Monday trading prices are very likely to be lower than its IPO price.”

The gray market refers to trading on unofficial platforms outside the official stock exchange where a company’s shares are traded.

Xiaomi raised about $4.7 billion from the offering, and will receive about $3.1 billion of that in actual proceeds after all fees and other expenses, according to the stock exchange filing.

Market observers have said Xiaomi’s high valuation is putting off investors despite the company’s hype. Its IPO in Hong Kong next week will be one of the largest and most-watched Chinese tech floats since the 2014 debut of Alibaba Group Holding Ltd.