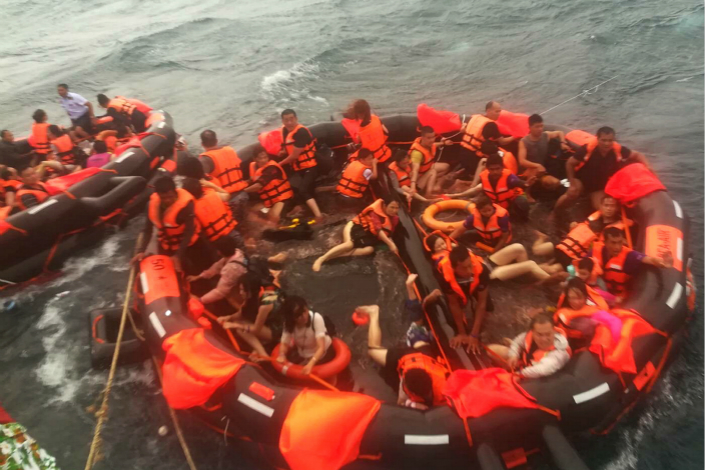 Rescued tourists from a capsized tourist boat are brought aboard a fishing vessel in the seas off Phuket, Thailand, on Thursday. Photo: IC

The death toll from the sinking of a tourist boat off the coast of Thailand has risen to 42 — with most of the passengers believed to be Chinese.

The Phoenix, a double-decker cruise ship, sank Thursday afternoon off the resort island province of Phuket during a storm, with 89 passengers and 12 Thai crew members aboard, according to Phuket Governor Norraphat Plodthong.

Earlier reports mistakenly reported that 93 passengers were on board. Nine people who were earlier reported as missing were found to have not boarded the vessel and are presumed to be alive.

A second vessel sank off Phuket during the same storm. The Serenita capsized with 42 people on board, all of whom were rescued, officials said.

The search for the missing is ongoing, and rescuers are working to retrieve the bodies trapped in the Phoenix wreckage, Vice Admiral Somnuk Preampramot, commander of the Royal Thai Navy’s Third Area Command, told Xinhua.

The Chinese Embassy and consulates in Thailand sent teams to Phuket shortly after the incident, and officials from the Chinese Consulate General in Songkhla visited the hospital where the injured were being treated, according to China’s Ministry of Foreign Affairs.