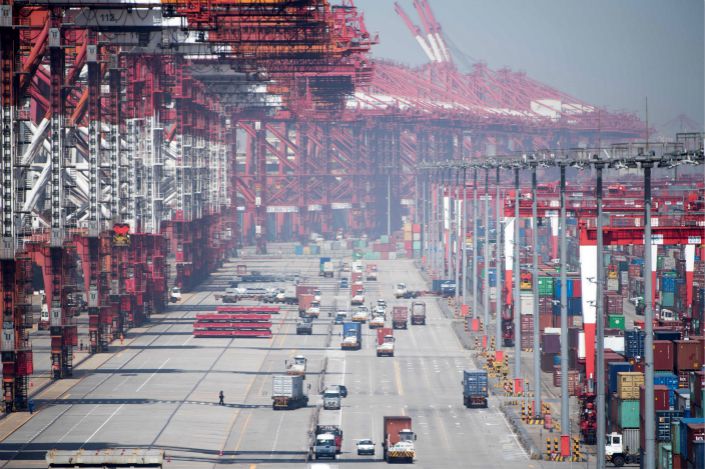 China urged American companies Thursday to do more to pressure the U.S. government in defense of their own interests in the escalating trade war between the world’s two largest economies.

The two sides have not been in touch about restarting talks to end the trade war after the Trump administration threatened a new round of tariff increases Tuesday, Chinese Commerce Ministry spokesman Gao Feng said Thursday at a media briefing.

In the briefing and in a statement (link in Chinese) published Thursday on its website, the Commerce Ministry reiterated that the government will take necessary steps to strike back. But the ministry didn’t detail how it plans to retaliate against Trump’s latest threat to impose 10% tariffs on $200 billion of Chinese goods.

That new threat came after Washington started to impose 25% duties on $34 billion of Chinese goods on July 6, and Beijing simultaneously retaliated with levies on an equal amount of American goods.

“We don't want to have a trade war,” Gao said at the briefing. “We are not afraid of one, and we will fight one if forced to.”

In the statement, China’s Commerce Ministry blamed the Trump administration for initiating the trade war for domestic political reasons and called the tariffs “typical unilateralism, protectionism and trade bullying.”

“China has done its utmost to prevent the escalation of trade frictions,” the ministry said in the statement. “The United States is fully responsible for the current situation.”

In the absence of government-level negotiations, China seemed to attempt to rouse domestic U.S. and global opposition to Trump’s trade policy.

The Commerce Ministry said the trade war targets not only China but is “a war against the world” that would “drag the word economy into danger.”

“Such U.S. practices will drag the world economy into the cold war trap, recession trap, anti-contract trap and the trap of uncertainty, seriously worsen the global economic and trade environment, destroy the global industrial chain and value chain, hinder global economic recovery, trigger global market fluctuations and hurt the interests of numerous multinationals and average customers in the world,” the ministry said.

The Trump-initiated tariffs have drawn criticism from U.S. trade groups and some lawmakers worried about higher costs for businesses and consumers.

Republican U.S. House Speaker Paul Ryan reiterated his opposition to the president's tariffs Wednesday, saying they “are not the right way to go.” Ryan said China engages in unfair trade practices but added, “I just don't think tariffs are the right mechanism” to resolve the problem.

Meanwhile, the U.S-China trade war is pushing Berlin and Beijing toward a united front.

Earlier this week, German Chancellor Angela Merkel and Chinese Premier Li Keqiang met in Berlin to talk up cooperation in sectors ranging from chemicals to cars.

Gao said at the briefing that both China and Germany oppose protectionism and vow to defend a free trade system based on multilateral rules.

Gao said the impact of the U.S.-China trade war will start to show in the second half. In response, China will aggressively push trade diversification and explore new markets, Gao said.