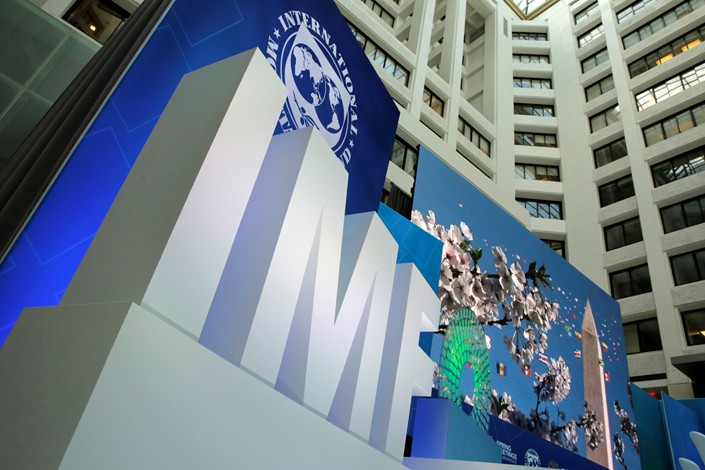 The International Monetary Fund predicts that the global economy will grow 3.9% in 2018 and 2019, unchanged from its April forecasts. Photo: VCG

* IMF official warns that global output could weaken by 0.5% from its projected level by 2020 if all threatened trade measures are implemented

The IMF projected that the global economy will grow 3.9% in 2018 and 2019, unchanged from its April forecasts, the fund said in its “World Economic Outlook Update,” released on Monday U.S. time.

However, downside pressure on the upswing, which started about two years ago, has become more salient as growth has slowed in many developed economies, including Japan, the eurozone and the U.K., while emerging markets are facing headwinds from rising oil prices, escalating trade tensions, higher interest in the United States, and domestic political and policy uncertainty, the Washington-based organization said. It also predicted that U.S. growth will decelerate over the next few years as the cyclical recovery runs its course and the effects of stimuli such as tax cuts and increased government spending taper off.

The IMF warned that the escalating trade tensions between the U.S. and its trading partners are threatening to derail the world’s economic recovery and depress medium-term growth prospects because the measures could undermine business and financial-market sentiment, as well as lower productivity by hindering investment, disrupting global supply chains and slowing the spread of new technologies.

Global output could weaken by 0.5% from its projected level by 2020 if all threatened trade measures are implemented, he said. Although the U.S. initiated the tariff sanctions against other countries, it could end up being hit the worst in a full-blown trade war at the center of global retaliation because a relatively high share of its exports will be taxed, he added.

The U.S. has slapped tariffs on imported solar panels, washing machines, and steel and aluminum from China and even some American allies, as U.S. President Donald Trump keenly pushes his “America First” policy in the run-up to the midterm elections in Congress in November. Punitive American taxes have been implemented on more products from China, and Trump has threatened to impose additional tariffs on another $200 billion worth of Chinese goods, including seafood, metals and farm produce.

China, the EU, Canada and Mexico have all responded by imposing retaliatory duties on U.S. goods.

Financial markets have seemed broadly complacent despite all the downside risks faced by the global economy. However, they are “susceptible to sudden re-pricing if growth and expected corporate profits stall,” Obstfeld said.

The IMF called on countries to avoid protectionist measures and embrace “multilateral cooperation within an open, rule-based trade system” to preserve the global expansion.

“(C)ountries must resist inward-looking thinking and remember that on a range of problems of common interest, multilateral cooperation is vital,” Obstfeld said, pointing to issues such as excess global imbalances, terrorist threats, disease and global warming.

The IMF has forecast that China’s growth will moderate from 6.9% in 2017 to 6.6% this year and 6.4% in 2019 as regulatory tightening on the financial sector takes hold and external demand softens. The figures are in line with the IMF’s April projections.

It revised down its forecast for growth in the eurozone to 2.2% from 2.4% for this year and to 1.9% from 2.0% for 2019. For Japan and the U.K., the IMF predicted economic growth this year of 1% and 1.4% respectively. Both figures were 0.2 percentage points lower than projections made three months ago.