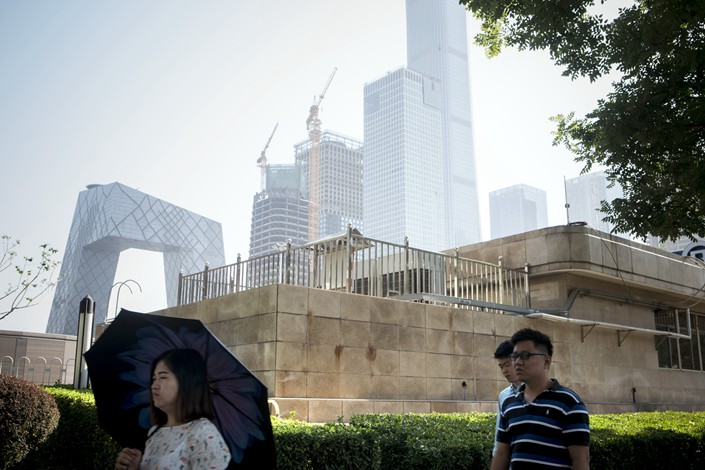 * Growth of government-driven infrastructure investment slows to 7.3% in the first half

(Beijing) — China’s economic growth decelerated to 6.7% year-on-year in the second quarter as government-led infrastructure spending slowed sharply, official data showed on Monday. The reading has not been this low since the third quarter of 2016.

The latest data brought the country’s economic growth rate to 6.8% in the first half of the year, according to the National Bureau of Statistics (NBS).

The growth rate of China’s gross domestic product (GDP) in the second quarter was the same as the median estimate in a Bloomberg News survey of economists, and was down from the 6.8% growth in each of the three previous quarters.

The data suggest that “the economy is under a broad deceleration, though the pace remains mild for now,” said Larry Hu and Irene Wu, analysts with Macquarie Capital Ltd., in a note.

Fixed-asset investment excluding rural households, a key driver of domestic demand, rose 6% year-on-year in the first half, slowing further from 6.1% in the January-May period, NBS data showed. The reading marked the weakest growth since the data series was first released in February 1998.

Year-on-year growth of government-driven infrastructure investment, which consists of spending on the construction of roads, railways and other public facilities — though not those for electricity, heating, gas and the water supply — slowed to 7.3% in the first six months from 9.4% in the first five months, marking the sixth straight monthly slowdown.

Analysts attributed the slowdown of infrastructure investment growth to Beijing’s efforts to tighten local government borrowing, as well as the national deleveraging campaign, which has forced banks to move their off-balance-sheet loans back to their balance sheets.

While policymakers encourage banks to increase formal bank loans, it’s far from enough to offset the drop in off-balance-sheet lending, which local government-backed financing platforms used to rely heavily on, and infrastructure investment was the first to take the hit, said Hu and Wu.

The biggest downward pressure on economic growth came from the slowing infrastructure investment, which offset the rebound of manufacturing investment growth and dragged down the growth of fixed-income investment, Liu Dongliang, an analyst with China Merchants Bank, said in a note.

On a seasonally adjusted quarter-on-quarter basis, China’s GDP growth rebounded to 1.8% in the second quarter after three consecutive quarterly declines, compared with the 1.4% growth in the first quarter.

Investment in real estate development rose 9.7% year-on-year in the first half of the year, lower than the reading of 10.2% in the first five months.

However, the annual growth rates of new starts and sales in the property sector both accelerated in the first six months compared with those in the first five months.

Retail sales, which include spending by households, government departments and businesses, rose 9% year-on-year last month, picking up from 8.5% in May that marked the weakest increase since June 2003.

Given deteriorating credit conditions, slower economic growth and rising credit risks in the second half of the year are expected, said Hu and Wu. While some fine-tuning, such as reserve requirement ratio cuts, are likely, the policy is not very likely to turn around from the current deleveraging push, they said.

Monetary policy is not the key issue at the moment, and it makes more sense for fiscal policy to take the lead, through measures such as cutting the tax and nontax burdens on businesses and making full use of existing financial funds, Liu said.

The deceleration in GDP growth in the second quarter came as officials are debating the role of fiscal policy in pump-priming the economy.

Xu Zhong, director-general of the research bureau of the People’s Bank of China, in a speech on Friday criticized fiscal policy for failing to be active to play the “countercyclical role” of bolstering economic growth, particularly at a time when the government was strengthening efforts to deleverage the financial sector and rein in local government debt.

He also lashed out at the practice of disassociating local governments from the responsibility to repay implicit borrowing: “Such moves may lead to moral hazard, lowering local authorities’ willingness to pay off debt, which would pass the fiscal risks to the financial sector, give rise to bad loans, and even trigger systemic risks.”

However, Liu Shangxi, head of the Finance Ministry-linked Chinese Academy of Fiscal Sciences, argued that fiscal policy at the current stage should be more predictable and forward-looking than just being expansionary given the increasing economic uncertainties both within the country and abroad.