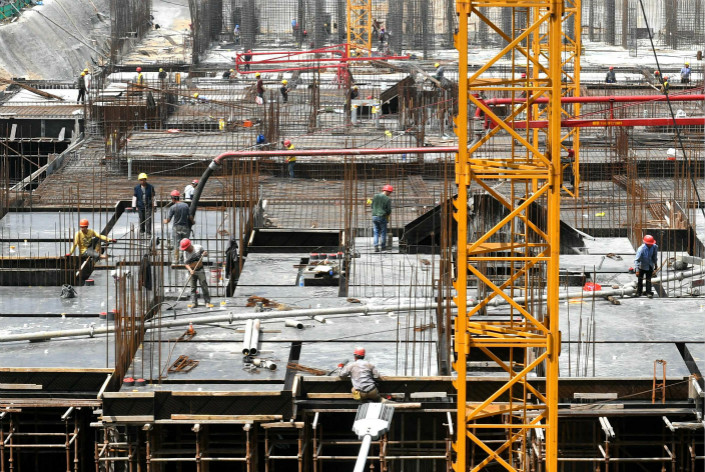 A construction site is seen in Fuzhou, Fujian province, on March 14. Photo: VCG

* Infrastructure investment grows 12.4% year-on-year in the first four months of 2018

Government-driven infrastructure investment, which includes the construction of roads, railways and other public facilities — though not those for electricity, heating, gas and the water supply — rose 12.4% year-on-year in the first four months of the year, slowing from growth of 13% in the first quarter, according to data released Tuesday by the National Bureau of Statistics (NBS). It marked the slowest growth in available data going back to April 2014.

For infrastructure investment, a growth rate above 12% is not low, given that China is trying to transition from an era of high-speed growth to one of high-quality development, NBS spokeswoman Liu Aihua said at a briefing on Tuesday.

To explain the slowdown in infrastructure investment growth, Liu first noted that the growth rate of above 20% in the same period last year provided a high baseline for comparison.

The slowdown was also due to Beijing’s increased oversight on local government borrowing and public-private partnership (PPP) projects to close loopholes that local officials had used to raise funds through banned channels, Liu said.

China’s fixed-asset investment excluding rural households, a key driver of domestic demand that encompasses infrastructure investment, rose 7% year-on-year in the first four months, slowing from an increase of 7.5% in the first quarter, NBS data showed. The cumulative reading is the weakest since 1999, when it was 6.3%.

It’s not possible for fixed-asset investment to continue to grow as fast as it had in the past, Liu said. Although investment growth tapered in April, the structure of that investment was better optimized as investment in high-tech manufacturing, high-tech services and the social sector experienced rapid growth.

China’s value-added industrial output, which measures production at factories, mines and the utilities sector, rose 7% year-on-year in April, up from a recent low of 6% in March, according to NBS data.

Industrial activity was buoyed in April as companies have been rebuilding inventories that were depleted during the winter, when air-pollution controls disrupted production, said Julian Evans-Pritchard, an economist with research firm Capital Economics. “If we are right, then the recent resilience of industrial activity is likely to prove temporary,” he said in a research note.

Growth of industrial output for exports, a leading indicator for exports, rose 4.2% year-on-year in April, up from an increase of 4% in March, much lower than the pace of 7.6% for the first quarter. The modest pickup is weaker than the rebound implied by April export growth, suggesting a slowdown in exports is inevitable, said Wendy Chen and Lisheng Wang, economists at Nomura International (Hong Kong) Ltd., in a note.

Retail sales, which include spending by households, businesses and government departments, rose 9.4% year-on-year in April, down from 10.1% in March.

The surveyed unemployment rate in urban areas, which counts jobless migrants, dipped to 4.9% in April from 5.1% in March, NBS data showed.

However, analysts don’t read much into the recently published indicator due to lack of historical data.

On the whole, curbing “tail risk” tops the priority this year for policymakers. It’s unlikely that they will loosen policy when the economy still looks set to grow around 6.7% this year, said Larry Hu, an economist with Macquarie Capital Ltd. in Hong Kong. It is also unlikely they will tighten policy, given weak consumer inflation and concerns about overshooting their policy goals.