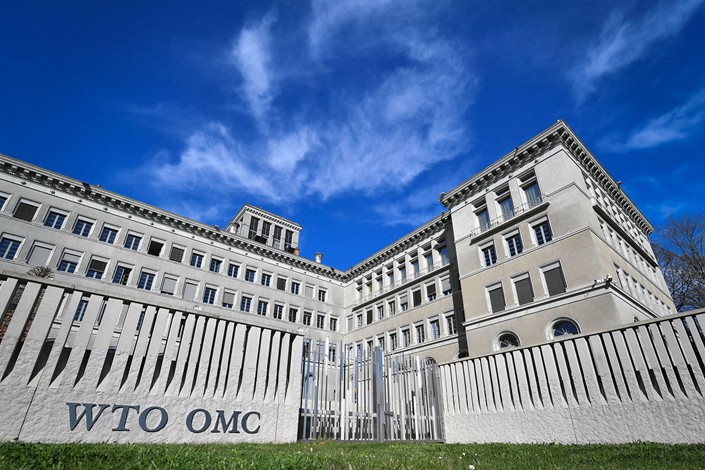 The headquarters of the World Trade Organization is seen in Geneva, Switzerland, on April 12. Photo: VCG

* Despite U.S. accusations, China has carried out its commitment to the WTO well, even exceeding expectations in certain aspects

* The U.S. has violated WTO rules by imposing retaliatory tariffs on member countries that have not violated an international agreement or international rules

(Beijing) — Has China violated the rules of the World Trade Organization (WTO) as the U.S. has said? The most reliable answer should be from the WTO itself.

On the 10th anniversary of China’s entry to the WTO, former WTO Director-General Pascal Lamy said in an interview with the U.S. magazine China Business Review: “China has done really well in terms of implementing its long list of commitments. But no country is above criticism. … What I can say is that members have complained about certain services sectors not being open sufficiently and that intellectual property rights protection needs to be improved.”

So, what exactly did China promise when it joined the WTO?

Among its major commitments, China promised to lower its average tariff to 9.8% from 15.8% in 10 years; eliminate nontariff barriers; cut tariff quotas; cut subsidies, especially those for agriculture; open up the country’s telecommunication industry; open up its financial services sector according to a timetable; as well as accept a special discriminatory treatment as a nonmarket economy, which allows other WTO member countries to take discriminatory measures against China.

Looking back, we can see that China carried out its commitment to the WTO well, even exceeding expectations in certain aspects.

Take the tariff cuts as an example. Starting in 2002, China gradually lowered tariffs on the majority of its imports by Jan. 1, 2005. Over the next five years, it phased in all of the tariff reductions, according to Commerce Ministry spokesperson Shen Danyang. By Jan. 1, 2010, China’s average tariff had fallen to 9.8%, fulfilling the country’s WTO obligation and exceeding the organization’s requirements on developing countries.

Regarding services, China has opened up 120 service industries (to foreign investors), exceeding the WTO’s requirement of 100. The level of opening-up is well above the level of developing countries and nears that of developed countries. However, we should admit that China has fallen behind in its efforts to open up the financial services sector.

To judge whether a member country has fulfilled its commitments to the WTO, the key indicator should be whether it respects the dispute settlement mechanism and obeys the rulings of the organization.

Cui Fan, professor at the University of International Business and Economics, has noted: “China has been accused 40 times since its WTO accession in 2001, while the U.S. has been accused 80 times. … When China loses an appeal, it has carried out all rulings without exception. The U.S., however, is always dragging its feet on execution. China has just won a dispute with the U.S. (on its national security tariffs on steel and aluminum), but the U.S. not only disavowed the verdict, but also tried to reshuffle the appointment of the WTO’s Appellate Body, removing three of seven judges from their seats.”

When the China lost a WTO ruling regarding its restrictions on rare-earth exports, it swallowed the ruling and canceled its export quotas. That shows China respects the WTO.

The U.S. didn’t adopt a negative stance toward China’s WTO compliance until after 2016. “The data confirm a dramatic expansion in trade and investment among China and its many trading partners, including the U.S., since China joined the WTO,” the Office of the United States Trade Representative (USTR) wrote in a report that year.

U.S. goods exports to China totaled $116 billion in 2015, representing an increase of 505% since 2001, making China the United States’ largest export market for goods outside of North America. Over the same period, U.S. services exports grew 802% to $48 billion in 2015.

However, the USTR changed its tune in its 2017 report, which expressed the U.S.’ regret for giving China the green light to join the WTO. “It seems clear that the U.S. erred in supporting China’s entry into the WTO on terms that have proven to be ineffective in securing China’s embrace of an open, market-oriented trade regime,” the report said.

What does that mean? At the very least, it shows the U.S.’ dishonesty. On one hand, it admitted that China has fulfilled its commitments to WTO, but on the other hand, it is unsatisfied with the promises China made in the first place. Otherwise, it’s unsatisfied with WTO itself as an organization. It’s like a losing team trying to change the rules mid-game.

In fact, the U.S. shifted its focus from China’s implementation of WTO commitments once it realized that it’s difficult to challenge China on that point. It’s also difficult for the U.S. to achieve its own goals when China is hurting its interests under current WTO rules. That’s why the U.S. has given up on reforming WTO rules, and has instead turned to using domestic laws to deal with trade disputes with China.

Among the U.S.’ top concerns is China’s technology development, especially via its “Made in China 2025” campaign, which serves as a road map for China to surpass the U.S. Under these circumstances, the Trump administration instructed the USTR to begin the Section 301 process in August 2017.

The USTR said in the Section 301 investigation report that it targeted policies implemented by China that could violate the trade agreement, add extra burden or restrictions to the U.S., or cause unfair, unreasonable or discriminatory competition to U.S. business. In other words, the investigation is no longer about China’s commitments to the WTO, but about the USTR’s definition on what is “reasonable, nondiscriminatory” policy to the U.S. Once the USTR define the policy as “burden” or “restrictions,” then the U.S. president has the right to carry out retaliatory tariffs.

However, we should remember that the WTO rules are multilateral international conventions. In terms of legal status, it is the most important multilateral discipline with a universal binding force in the global trade system. Having said that, it is obvious that using Section 301 has violated WTO rules since it allows the U.S. to impose retaliatory tariffs on member countries that have not violated an international agreement or international rules.

As Zhang Xiangchen, China’s ambassador to the WTO, noted: The U.S. shall by no means determine unilaterally that other members have violated the WTO rules. Thus, the approach of using domestic laws to impose tariffs on Chinese imports should be seen as a peremptory act that violates the most fundamental values and principles of international rules.

Yu Yongding, a member of the Chinese Academy of Social Sciences, served on the Monetary Policy Committee of the People’s Bank of China from 2004 to 2006.