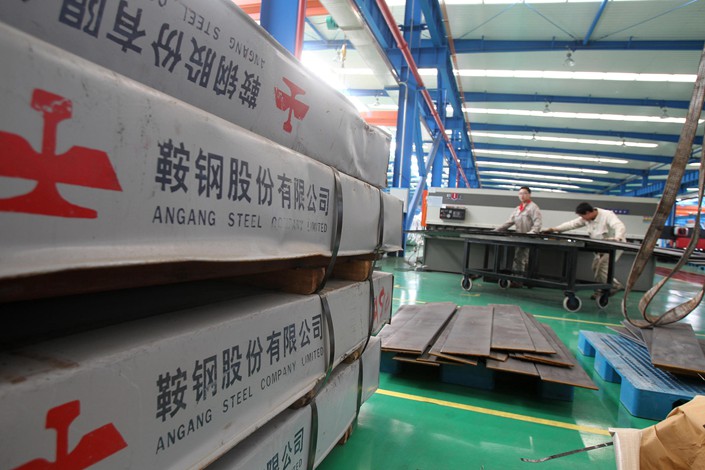 Angang Steel’s Hong Kong-listed shares rose 4.9% on Thursday, while its mainland-listed shares in Shenzhen finished up 3.8%. The move marks the latest step in Beijing’s broader efforts to consolidate the nation’s vast network of mostly state-owned steel-makers, an effort that has begun to bear fruit as many companies start to show improving financial performance with stabilizing prices.

Based in Northeast China’s Liaoning province, Angang Steel said Angang Chaoyang will become one of its wholly owned units after the purchase from the two companies’ parent, Angang Holding, according to a company statement issued on Wednesday.

The merger follows a number of similar deals over the past two years, as Beijing tries to rationalize an industry that became plagued with overcapacity following the recent slowdown in China’s economic growth. That overcapacity has drawn protests from both the U.S. and Europe, which accuse China of dumping state-subsidized steel into their markets and have levied punitive tariffs as a result.

Among the many mergers of the last two years, one of the largest was state-owned Baosteel Group Corp.’s union with Wuhan Iron and Steel (Group) Corp. in 2016 to create China’s largest steel-maker.

The latest merger also comes as steel-makers are seeing improved financial performance with the ongoing consolidation. The Hong Kong- and Shenzhen-listed Angang Steel saw its profit more than triple to about 5.6 billion yuan last year from about 1.6 billion yuan in 2016, according to its latest annual results.