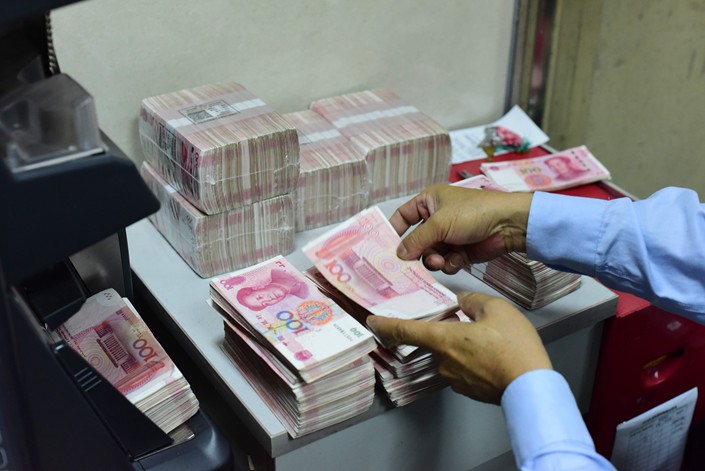 * Sudden surge in soured loans has been partly caused by changes in regulatory requirements for the recognition of bad debts, which have forced many lenders to reclassify loans at risk of nonpayment

* Some analysts say the relatively small size of the rural banking sector means the risks it could pose to the health of the financial system are controllable, but others are concerned about the potential spillover effects on the interbank market

(Beijing) — A surge in bad debts at another small rural lender has deepened concerns that a corner of China’s banking sector may be headed for a crisis that could spill over into the nation’s interbank market.

Henan Xiuwu Rural Commercial Bank Co. Ltd., based in a sparsely populated county in the north of Henan province in Central China, saw its nonperforming loan (NPL) ratio explode to 20.7% at the end of 2017, up from 4.5% at the end of 2016, according to its annual report. Its loan loss provision ratio, a key indicator of a bank’s ability to withstand future losses, nose-dived to 43% from 191%, well below the current regulatory requirement of 120%. Henan Xiuwu’s website, where its annual report was posted, has been unavailable this week.

Xiuwu is the latest in a string of rural commercial banks to reveal significant deterioration in its financial position. The sudden surge in soured loans has been partly caused by changes in regulatory requirements for the recognition of bad debts, which have forced many lenders to reclassify loans at risk of nonpayment. But aggressive expansion over the last few years and poor risk management have also contributed to the accumulation of credit risks, analysts said.

Guiyang Rural Commercial Bank, whose NPL ratio jumped to 19.5% last year from 4.1% in 2016, had its credit ratings cut by China Chengxin International Credit Rating Co., Ltd. to A+ from AA- on July 10. Shandong Zouping Rural Commercial Bank Co. Ltd. was also downgraded by Golden Credit Rating International Co. Ltd. for similar reasons. Its bad debts quadrupled to 1.16 billion yuan ($171.5 million) as of December from a year earlier, pushing its bad-loan ratio to 9.3% from 2.4%.

Also joining the club was Shandong Shouguang Rural Commercial Bank Co. Ltd., whose asset quality deteriorated sharply last year. Its Beijing-based auditors would not give the company’s 2017 accounts a clean bill of health and were prepared to issue only a qualified opinion, saying the bank had made insufficient provisions for loan losses and asset impairment.

The sudden surge in NPLs among rural banks, is part of the fallout from new regulations about the classification of bad debts aimed at forcing them to come clean about the extent of the problem. The China Banking and Insurance Regulatory Commission (CBIRC) has given city and rural commercial banks until the end of 2019 to classify all loans more than 90 days overdue as NPLs, although some local regulators are requiring lenders to comply even earlier.

A report by banking analysts at Citic Securities Co. issued on July 16 shows that of the 65 rural banks that have issued their 2017 results so far and raised money last year in the interbank market through negotiable certificates of deposit (NCD), 31 reported rising bad-loan ratios. Three of them –– Xiuwu Rural Commercial Bank, Guiyang Rural Commercial Bank, and Shandong Zouping Rural Commercial Bank –– had a jump of more than 3 percentage points. The NPL ratios of 34 other rural lenders fell.

According to Xiao Feifei, a banking analyst at Citic Securities, rural banks reporting a jump in NPLs tend to be clustered in three regions –– the Bohai Rim, an economic region around Beijing and the neighboring port city of Tianjin; the traditional rust belt areas of Northeast China; and Central China. Rural lenders in the Yangtze River Delta area, comprising Shanghai, Jiangsu and Zhejiang provinces; big cities such as Beijing; and Sichuan and Guangdong provinces on average have lower bad-debt ratios.

“We expect that the risks attached to rural commercial banks will increase moderately in some regions,” Xiao wrote in the report. “But given the overall size of the rural commercial bank sector is relatively small, the probability of a concentrated explosion of risk is unlikely.”

There are 1,114 rural commercial banks in China, accounting for 46% of the total number of banks, which stood at 2,442 at the end of 2016, CBIRC data show. Add in another 1,125 rural credit cooperatives, and the proportion rises to 91.7%. But the combined assets of the rural financial institutions as of May this year amounted to just 13.4% of total banking assets. Outstanding NCDs issued by rural commercial banks stood at 783.1 billion yuan as of July 20, accounting for just 8.8% of the total 8.95 trillion yuan of certificates outstanding, according to Hithink RoyalFlush Info, a data provider.

The relatively small size of the rural banking sector means the risks it could pose to the health of the financial system are controllable, according to some analysts, who say the surge in NPLs reported by some banks should be viewed as isolated cases and don’t pose any systemic danger.

However, other analysts are concerned about the potential spillover effects of the rural banking sector’s troubles on the interbank market, which oils the daily wheels of the financial system and where lenders and other financial institutions borrow money from each other.

There are concerns that rural banks may not be able to repay the NCDs they have issued as their weakened financial positions make it more difficult to refinance their debts. Other institutions may be more reluctant to buy their NCDs because of the greater risks involved, or demand higher yields to compensate for the dangers, which would increase the financial burden on the rural banks.

Since the beginning of 2017, 15 small and midsize lenders have had their credit ratings cut or faced problems such as a high concentration of loans among certain customers, a continuous rise in nonperforming loans, or insufficient capital adequacy ratios, according to Xu Hanfei, a fixed-income analyst with Industrial Bank.

Those problems are getting worse, and small banks will face increasing liquidity and region-specific business risks along with corporate governance issues, which raises the odds they will spill over into the interbank market, he said.

Most of the NCD that carry low credit ratings are issued by rural banks, he said, noting that out of 122 issuers with ratings below AA, 103 were rural commercial banks and many came from the rust belt provinces of Shanxi, Jilin, Heilongjiang and Liaoning. An economic downturn in those regions will further impact the asset and credit quality of the rural banks, Xu added.

“The market’s evaluation of banks with these different rating profiles isn’t yet fully reflected in the pricing of bonds or NCD,” mainly because the risks to buyers of the debt instruments are hidden under the surface, Xu said. But as the regulatory environment gets tighter, these risks will undoubtedly rise to the surface, he said.