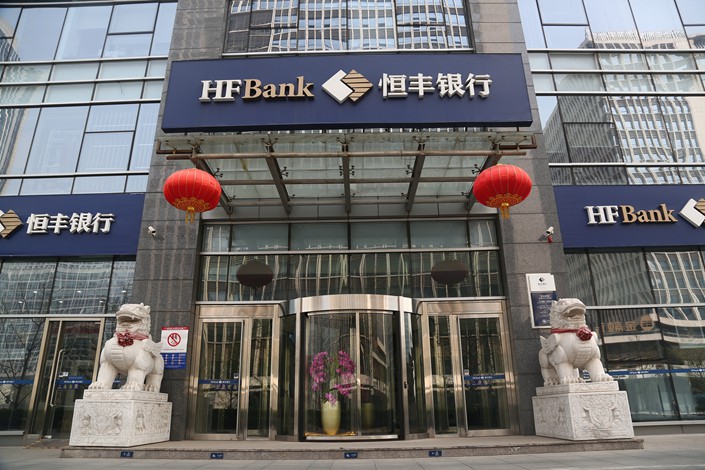 A branch of Hengfeng Bank is seen in Beijing on April 1. Photo: VCG

(Beijing) — A former head of a national joint-stock bank has been charged with embezzling 750 million yuan ($110.8 million) of the bank’s shares, state media reported.

In a trial that began last week in East China’s Shandong province, prosecutors accused Jiang Xiyun of transferring shares of Hengfeng Bank to himself and his relatives while he served as the bank’s chairman from 2008 to 2013, according to a report by the official Xinhua News Agency.

Caixin has learned that one of the four counts of embezzlement involved 150 million bank shares being transferred to a Nanjing construction company controlled by Jiang’s relatives.

Prosecutors also charged Jiang with corruption and accused him of urging a relative surnamed Sun to destroy accounting records from five companies in September 2014.

Hengfeng Bank, which came into existence in 2003, is one of the 12 national joint-stock commercial banks, with 334 branches nationwide. At the end of 2016, it had 1.2 trillion yuan in net assets and earned 9.1 billion yuan in net profit that year, according to its website.

The Jiang case lays out how flawed corporate management due to a lack of internal controls made it possible for two of the bank’s former leaders, including Jiang’s successor, Cai Guohua, to allegedly embezzle the bank’s capital for personal gain for 15 years.

In October 2014, Jiang was put under investigation by the Communist Party’s anti-corruption watchdog. In November 2013, he was succeeded by Cai Guohua, the then-deputy mayor of Yantai, where Hengfeng Bank is based.

Jiang said that Cai gave him the cold shoulder when he requested Cai’s assistance with the handover.

Cai, however, followed in Jiang’s footsteps, despite claiming he was fixing the problems Jiang created, Caixin has learned. In the process, the bank took on huge risks.

Caixin has learned that Jiang was investigated because Cai had discovered Jiang had allegedly provided an irregular 4 billion yuan of bank guarantees to Chengdu Mind Group, a shareholder of the bank. Cai reported the issue to the watchdog, which led to an investigation.

Cai leveraged Jiang’s misconduct to take over, only to begin an attempt to take control of the bank’s shares, Caixin has learned. In one case, Cai allegedly leveraged 23.6 billion yuan from off-balance sheet funding and interbank loans to make a private placement in two of Hengfeng Banks’ holding companies.

Cai himself fell under investigation in November due to “severe violations of party discipline,” the Shandong provincial government said, using a common party euphemism for corruption.

Hengfeng bank’s biggest shareholder is Yantai Blue Sky Investment and Development Co. Ltd., a subsidiary of Yantai city’s State-owned Assets Supervision and Administration Commission. Yantai Blue Sky failed to do anything to prevent the two heads from embezzling the bank’s shares, which resulted in the loss of state-owned assets, Caixin has learned.