By Qian Tong and Jason Tan 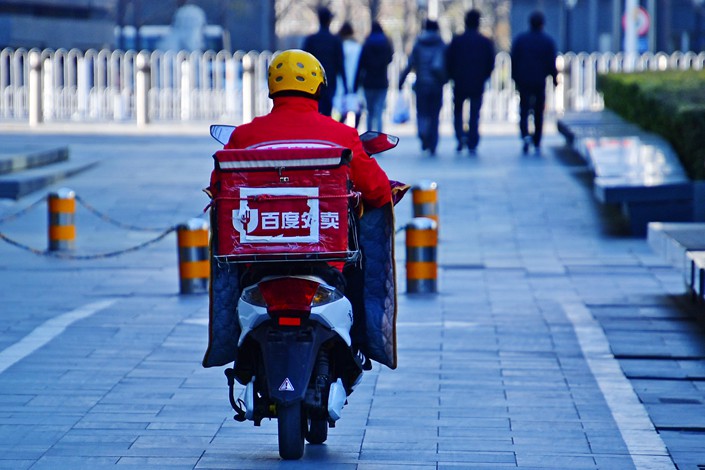 A Baidu Waimai deliveryman drives down a street in Beijing on Nov. 18. Photo: VCG

Mid-July was rainy in Beijing, and the normally crowded streets were relatively quiet. But the stormy weather failed to disperse the 200 protestors who had been congregating for days in front of Baidu Inc.’s headquarters in Haidian district.

They were mostly contractors who manage the Baidu Waimai food-delivery service in cities around China.

Their complaint: As agents they lost thousands of dollars in investment when the internet giant sold off its delivery unit to rival Ele.me. In China, food delivery is ubiquitous and the market is highly competitive. Amid the industry boom, a few big names have emerged: Baidu Waimai, Ele.me, Meituan Waimai and ride-hailing leader Didi Chuxing.

Baidu Waimai runs its business in core cities such as Beijing, Shanghai, Guangzhou and Shenzhen, but contracts out to exclusive agents in other cities to expand its network across the country.

Baidu Waimai offers the agents access to its technology platform — including the delivery app — but agents are responsible for operations in their respective areas. They have to arrange the partnerships with restaurants, promote sales and marketing activities and recruit deliverymen.

Agents pay Baidu Waimai as much as 20% of their revenue under the deal, Caixin has learned. Baidu specifies in the contract that the business model carries certain risks — foremost, that agents have to invest their own money, and profitability isn’t guaranteed.

Things went downhill in August, when parent Baidu decided to dispose of the unit to its larger rival Ele.me, which is backed by e-commerce giant Alibaba Group Holding Ltd., in a deal reportedly valued at $800 million. Baidu Waimai had been bleeding cash as it offered steep discounts to lure customers in the early days. Moreover, parent Baidu had decided to shift its business strategy to focus on artificial intelligence and self-driving technologies.

In April, Alibaba bought out the remaining stake of Ele.me in a deal that valued the food-delivery leader at $9.5 billion.

Though owned by Ele.me, Baidu Waimai continues to operate under its own brand and management team. Ele.me provides finance and support.

But the integration didn’t go as planned, according to some Baidu Waimai agents.

“We feel abandoned,” said one agent, who asked that his name not be published. For a local agent to build a Baidu Waimai operation in a given city, a couple million yuan is required, he told Caixin. “If it weren’t flagging the Baidu name, we wouldn’t have come onboard.”

But the legal liability doesn’t lie with parent Baidu, according to a professor at the China University of Political Science and Law.

“Baidu and Baidu Waimai are two separate legal entities,” said Zhao Zhanling. “Agents should instead go to Baidu Waimai to make their claims, or sue it.”

But that may be a dead-end. Baidu Waimai isn’t obliged to compensate agents’ losses, because they have to bear operational risks, just like any other businesses, Zhao said.

Baidu Waimai said it has agreed to return the deposits agents paid upfront before joining the business. If an agent decides to opt out, a standard “exit mechanism” has also been put in place, Ele.me said.

The protesting Baidu Waimai agents have collectively asked for 460 million yuan ($67.95 million) in compensation. It isn’t known if their request will be fulfilled.