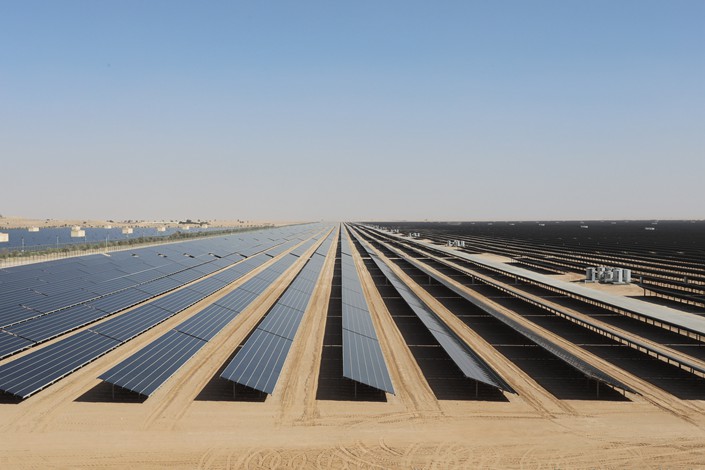 China’s state-owned Silk Road Fund will acquire a 24% stake in a solar project in the United Arab Emirates, touted as the largest of its kind.

The 700-megawatt single-site solar thermal plant will be funded and developed by the Chinese fund, plus the Dubai Electricity and Water Authority and Saudi Arabia’s ACWA Power Barka SAOG, according to a statement released Sunday by ACWA Power, contractor of the project.

The investment “is in keeping with our investment strategy of efficiently deploying our own capital to retain a meaningful level of equity interest in each project,” ACWA Power CEO Paddy Padmanathan said in the statement.

The statement didn’t reveal financial terms from the Silk Road Fund, a $40 billion initiative launched in 2014 as part of Beijing’s Belt and Road Initiative to help finance the development of infrastructure projects along the centuries-old Silk Road trade routes.

The mega-fund has since made a slew of investments, including in Russia’s largest petrochemical group, Sibur Holding PAO; a hydropower project in Pakistan; and a liquefied natural gas project in Sabetta, Russia.

The Dubai project is the fourth phase of the Mohamed bin Rashid Solar Park, the largest single-site concentrated solar power plant in the world, the statement said.

The project uses a combination of a central tower and parabolic trough technologies to collect energy from the sun, store it in molten salt and produce steam as required to generate electricity during the day and throughout the night, it said.

The project is projected to deliver electricity at a levelized tariff of 73 U.S. cents per kilowatt-hour 24 hours a day, allowing it to compete with fossil-fuel generated electricity without subsidies, ACWA said.

The plant is set to increase the share of clean energy in Dubai to 25% by 2030, and expected to provide an annual saving of 2.4 million tons of carbon dioxide.