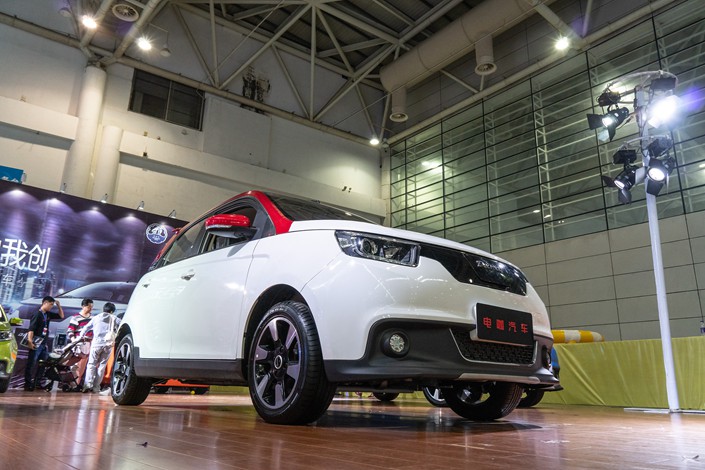 Electric-vehicle maker Dearcc showcases one of its models on May 1 in Fuzhou, East China’s Fujian province. Photo: VCG

Electric-car maker Dearcc has raised 2.5 billion yuan ($368.8 million) in total funding in the first half of this year, racing to catch up with other forerunners in the booming sector.

Its investors include government-led industry funds, financial institutions and companies in the auto industry, Dearcc said in a statement (link in Chinese) on Tuesday, without naming them. The company said it will use the money to develop new vehicle prototypes, build factories and recruit talent.

Founded in 2015, Zhejiang-based Dearcc is among a dozen electric-car specialists in China that have drawn immense investment interest as the government seeks to move the country from fossil fuel-powered vehicles to new-energy ones, as part of an effort to clean up its polluted air.

It’s estimated that 20 major electric-vehicle startups have emerged in China since 2014. Ten major players have secured more than 50 billion yuan in combined funding as of January, according to data compiled by Caixin (link in Chinese). By the end of last year, Nio, WM Motor, Xiaopeng Motors had raised the most money, taking in 15 billion yuan, 12 billion yuan and 5 billion yuan respectively.

“Most of the startups are still in their infancy and have yet to roll out commercial products,” said an industry watcher who asked not to be named. “They may have many prototypes ready, but whether consumers will buy into their concepts is another matter.”

Dearcc said in the statement that it pulled ahead of its peers by introducing its first commercial model — the EV10 — late last year. The company said it has sold as many as 2,000 units.

As of June, Dearcc has opened more than 60 retail locations in 30 Chinese cities, setting up showrooms in major cities such as Beijing, Shanghai and Changsha.