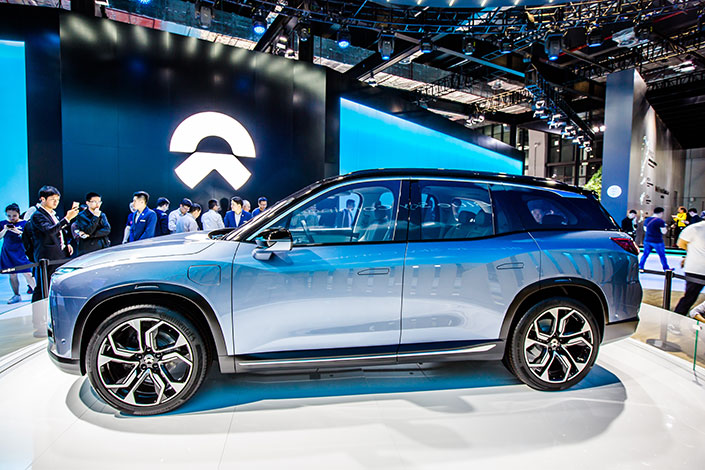 Electric car-makers Nio's first mass-produced SUV, the ES8, is unveiled at the Shanghai Auto Show in April 2017. Nio is backed by Tencent Holdings Ltd. and has raised about 15 billion yuan ($2.3 billion) in the course of five rounds of fundraising. Photo: VCG

Dozens of startup electric-vehicle manufacturers are benefiting from an investor gold rush spurred by government support for the domestic auto industry and new-energy transportation.

Among the estimated 20 electric-vehicle startups that have launched since 2014, the first 10 out of the gate have reportedly secured investments totaling more than 50 billion yuan ($7.9 billion).

One of the most prominent startups is Nio, an automaker backed by the social media company Tencent Holdings Ltd. that raised about 15 billion yuan in the course of five rounds of fundraising.

Other internet players including search engine Baidu Inc. and the e-commerce company Alibaba Group Holding Ltd. have also raised money for electric-vehicle ventures. Baidu led a fundraising round in December for WM Motor, while Alibaba has gotten behind an electric vehicle-maker called Xpeng.

The emerging competition between China's startup automakers and well-established global players could prove to be even more challenging than attracting investors.

Chinese consumers bought about 777,000 new-energy vehicles last year, including electric vehicles. Most were produced by domestic companies that took advantage of government policies and subsidies for low- and zero-emissions vehicles that have since been scaled back.

New government policies are now influencing foreign carmakers. Thus, these companies have started adjusting their offerings in China to meet a government mandate that electric vehicles comprise a percentage of each company's mainland sales starting in 2019.

In September, General Motors (GM) said it would launch at least 10 prototypes including prototypes not sold in China by 2020, and that all GM vehicles sold in China would be powered at least partly by electricity by 2025.

In the wake of successful fundraising initiatives, domestic electric-vehicle manufacturers are now poised to compete against the likes of GM and VW with increasingly sophisticated models. They also hope to improve their reputations among consumers.

Most early electric vehicles were little more than modified versions of vehicles powered by internal combustion engines, and quality was low for most of these early models, according to a senior technology engineer at Chery Automobile Co. Ltd. who declined to be named.

“Decades ago, China’s car industry companies could easily gain market share simply by means of low prices," said a senior executive at Geely Holding Group Co. Ltd., who asked to remain anonymous. Electric vehicle "startups now have to compete with global players on an equal level, as Chinese consumers are evolving and their tastes are becoming more sophisticated.”

Domestic companies are able to compete against foreign players in part due to low technological barriers to electric-vehicle manufacturing. They've also benefited from investors, particularly internet companies, with deep pockets.

“It's still a capital-intensive game,” the Geely executive said.

The Chinese government started offering subsidies for electric vehicles in 2010 in an effort to support an industry dominated by state-owned conglomerates as well as attract new sources of private funding.

Government leaders saw this emerging transportation sector as a chance to leapfrog Western automakers by attracting internet companies as well as enterprises seeking to expand into new business fields that were willing to bet on the sector.

This attracted business leaders such as Dong Mingzhu, CEO of the home appliance-maker Gree Electric, who personally invested $30 million to become the second-biggest shareholder of Zhuhai-based electric vehicle-maker Yinlong in 2016.

Nio stepped into the limelight after the electric-vehicle company Faraday Future and its founder Jia Yueting collapsed due to financial woes.

Nio has bucked the dealership system for vehicle sales in favor of a direct sales model that company founder and CEO William Li said offers improved buyer experiences at a lower cost.

Nio also plans to build a charging system: Li has pledged to open up to 1,100 battery-swap stations by 2020.

Li told Caixin his company will not in a rush into the game with a number of new models. Instead, the company plans to focus on pleasing buyers of its ES8, a strategy he called "key to Nio's survival."