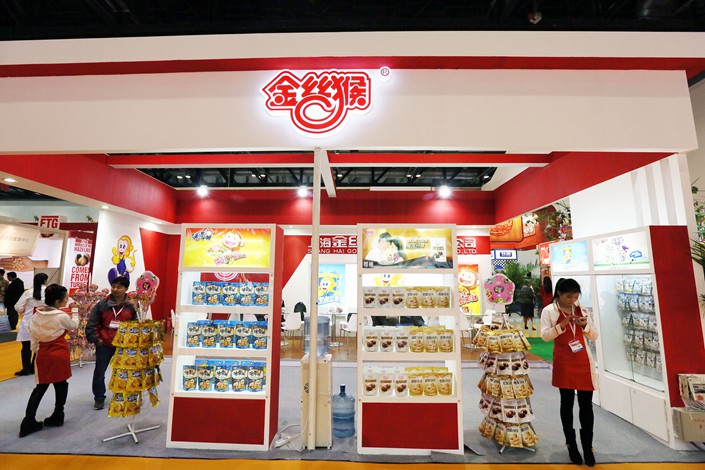 In addition, several Hershey executives, including its international president, Steven Schiller, have quit the board of Golden Monkey, a Shanghai-based producer of toffee, mint candy and cake. Schiller, who was the legal representative of the Chinese brand, was replaced by Zhang Jianfeng, head of the parent company of the new owner, according to the company registry record updated on Friday at the State Administration for Industry and Commerce.

“As part of our renewed strategy to grow our business by focusing on Hershey’s own brand chocolate, we decided to sell the Golden Monkey business,” the company said in an emailed response to Caixin, without disclosing the deal value.

Golden Monkey sold an 80% stake to Hershey in 2014, and Hershey bought the remaining 20% in the following years. The whole deal was worth 3.5 billion yuan ($515 million), according to a Hershey statement four years ago.

The “marriage” between the American chocolate-maker and the Chinese candymaker was aimed at helping Hershey expand to smaller Chinese cities where Golden Monkey had a large presence at a time when Hershey was popular only in large first- and second-tier cities, said Zhu Danpeng, a food-and-beverage industry analyst with the China Brand Research Institute.

“The sugar confectionery market has finally regained resilience in terms of retail value, but volume sales are still in decline as more-health-conscious consumers are cutting down on consumption or switching to alternative products or other snacks,” said Cici Wu, a research analyst at Mintel.

In addition, the Hershey and Golden Monkey management teams didn’t get along well, disagreeing on operating principles and working style, Zhu said.

As a result, Golden Monkey’s market share suffered, dropping from 1.4% of total confectionery sales, the ninth-largest sugar confectionery brand in 2014, to only 1% two years later, with its ranking falling to 11th place, according to market research firm Euromonitor International.

Hershey started to lay off Golden Monkey employees in 2015, according to Chinese media reports. Rumors that Hershey was considering the sale of the Chinese brand surfaced last summer, but the American company told Caixin at the time that the information was “untrue” and “unfounded.”

At the same time, the Hershey brand was also not doing well in the China market. In 2017, net sales in Greater China fell by 17.3%, the only market in the world to witness a decline, according to the company’s annual report.

In March 2017, the Shanghai-based chocolate joint venture between Hershey and South Korea’s Lotte Group was ordered to halt production for safety violations. The suspension occurred at a time when Sino-South Korean relations had worsened sharply due to the deployment of a U.S. anti-missile system that Beijing strongly opposed.

Three months later, Hershey told Caixin that the factory was “in operations as normal.”

Hershey said on Wednesday that it “remained committed to the growth opportunities and market potential of our business in China.” It has made efforts to tailor its production to local tastes, including the launch this year of a Hershey mooncake, a Chinese delicacy traditionally eaten during the Mid-Autumn Festival.