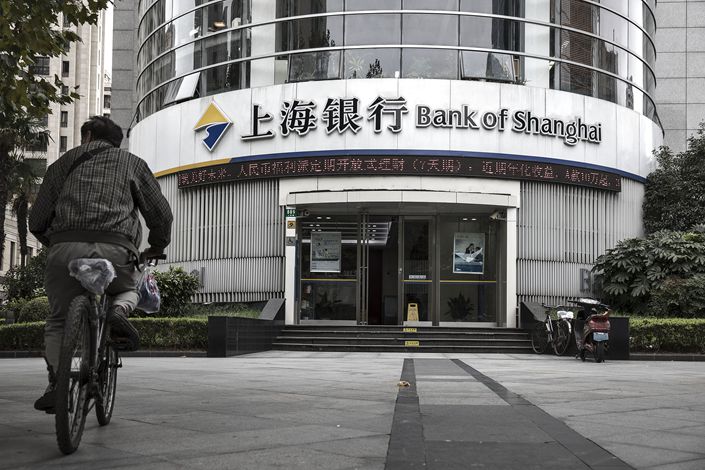 A Bank of Shanghai branch is seen in Shanghai in October 2016. Photo: VCG

A group of investors believes a Shanghai bank could help get their money back.

The investors, all of whom bought wealth management products (WMPs) linked to a company whose chairman disappeared a month ago, have been gathering outside a local branch of Bank of Shanghai to demand the return of their cash.

The dispute spotlights the responsibilities that custodian banks like Bank of Shanghai have in cases like that of Fuxing Group (FX Group), the Shanghai-based conglomerate behind the private equity (PE) firms that issued the WMPs bought by the aggrieved investors. Those three firms had issued more than 150 WMPs. It remains unclear how much investors have sunk into those products. But coupled with the company’s bank debt, FX Group’s total outstanding liabilities amount to an estimated 30 billion yuan ($4.43 billion).

FX Group found itself in the headlines after its chairman, Zhu Yidong, stopped responding to messages on June 25, a few days after he missed interest payments on several loans. Zhu, whose whereabouts remain unknown, left both investors and banks involved in the WMPs in limbo.

Most of FX Group’s wealth-management products had been properly registered with the Asset Management Association of China (AMAC), which oversees the private funds industry, and had banks serving as custodians. Custodian banks are financial institutions charged with holding investors’ money on behalf of the funds, and also provide services such as settling transactions, collecting dividends and making interest payments.

FX Group’s PE firms had entrusted several bank to be custodians of the money they raised through the wealth-management products. Those banks included Bank of Shanghai, China Everbright Bank, Hengfeng Bank and China Merchants Bank, with the first two getting much of the business.

It was Bank of Shanghai’s role as custodian that led the group of investors to one of its branches in Shanghai’s Pudong New Area, as they believe the bank ought to know the whereabouts of their money, Caixin has learned.

Even though custodian bank are charged with watching over investor funds, there have been cases in which they have neglected their duties.

For example, one custodian bank initially failed to identify that one recipient of the WMP funds was a shell company. The bank uncovered this fact only while conducting due diligence after FX Group’s financial problems emerged, Caixin has learned.

Many investors have sought help from Shanghai’s banking regulator, asking it to verify whether the custodian bank’s conduct has complied with the rules.

The investors also demanded that Bank of Shanghai and China Everbright Bank immediately seize the assets of the related projects and freeze all of Fuxing Group’s assets.

There are conflicting views about what the obligations of a custodian should be in these kinds of situations.

Simply put, AMAC believes that the custodian banks and the fund companies share responsibility for investors’ money because they both have been entrusted by investors. But the China Banking Association, an industry group, argues that a custodian bank is not a joint trustee of the funds and therefore has no legal obligation to meet the demands of investors under these circumstances.

The China Banking Association has published two articles on its website, citing its legal expert and chief economist, that rebut the opinion that custodian banks bear responsibility for investor losses after a fund manager disappears.

The WMP investors dispute this point. Several told Caixin that their fund contract states that the custodian banks’ responsibilities include monitoring how fund managers move money around. And in cases when either the contract or the law has been broken, the custodian bank has the right to take action and report the case to the AMAC.