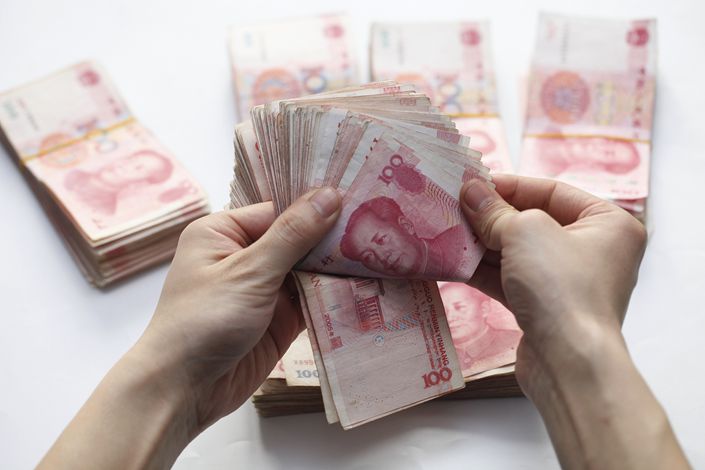 Three of China's “big four” banks are among 20 institutions involved in a state-backed fund to boost support for small companies. Photo: VCG

* The fund will have an initial registered capital of 66.1 billion yuan

(Beijing) — Three of China’s “big four” state-owned banks announced they are investing in a multibillion-dollar state-backed fund tasked with increasing financing to small businesses, agriculture-related enterprises and innovative startups, as part of the government’s campaign to boost funding for cash-starved areas of the economy.

Industrial and Commercial Bank of China Ltd., Bank of China, and Agricultural Bank of China Ltd. will each inject 3 billion yuan ($442.6 million) over four years into the National Financing Guarantee Fund (NFGF), the three lenders said in separate filings to the Hong Kong Stock Exchange that were released simultaneously on Wednesday. The money will be paid in installments beginning this year, they said.

The fund, launched by the Ministry of Finance and 20 institutions including the three banks, will have an initial registered capital of 66.1 billion yuan. Each of the three lenders will have a 4.54% stake, according to the statements. Although the three banks are listed in Hong Kong and Shanghai, the central government holds controlling stakes in them.

The State Council, China’s cabinet, announced in March that the NFGF (link in Chinese) was being set up, although it was first proposed back in 2015, with a target of raising no less than 60 billion yuan in the first phase. Its purpose is to mitigate financing difficulties and reduce funding costs for small companies and the agricultural sector, as well as support the development of new industries in line with national strategy. It will make equity investments and provide guarantees for guarantors, according to the statement issued.

The State Council estimated the fund would provide guarantees for 500 billion yuan of loans over the next three years, around a quarter of the total value of the country’s existing financing guarantee business.

On Monday, the State Council said it would accelerate cash injections (link in Chinese) into the NFGF, and announced a goal for the fund to support 150,000 new loans a year to small enterprises and drive 140 billion yuan in annual lending.

China’s government has long prioritized efforts to direct more credit to underserved sectors of the economy such as small businesses, rural enterprises, and new companies in emerging industries who have been traditionally locked out of the formal banking system because they are seen as high risk and have few assets to post as collateral for loans. The current Five-Year Plan, which covers 2016 to 2020, pledges to boost the role of what’s termed inclusive finance — universal access at a reasonable cost to financial services including savings, payments, credit and insurance.

“The investment (in the NFGF) is a strategic decision for the bank to serve the real economy and enhance its capacity in providing inclusive finance services in the new era,” ICBC said in its statement on Wednesday.

The ongoing regulatory campaign to rein in debt, excessive liquidity, and “shadow banking” has exacerbated the difficulties of small and innovative companies in getting loans, prompting the government to announce measures this year to encourage lending to these sectors, which it sees as playing a key role in supporting economic activity and job creation.

The People’s Bank of China (PBOC) late last month announced a series of policies to promote credit for small companies, including adding 150 billion yuan of relending and rediscount quotas for small firms and the agriculture sector, and lowering relending interest rates for small and micro enterprises by 0.5 percentage points.

The central bank also cut the amount of cash some lenders must keep in reserve with the PBOC, releasing billions of yuan to support qualified debt-for-equity swap programs and help small business financing. In the latest move, the central bank injected 502 billion yuan in cash through its one-year medium-term lending facility program on Monday, a record one-day offering, and gave priority to commercial banks that purchased corporate bonds with lower credit ratings.