In Depth: Hong Kong Cracks Down on Backdoor Listings

By Wei Yiyang and Lin Jinbing 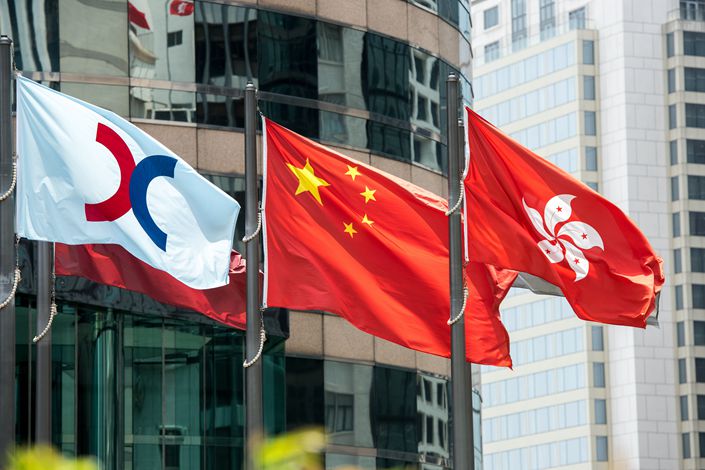 The flag of Hong Kong Exchanges and Clearing Ltd. (HKEx) (left) flies alongside the flags of China (center) and Hong Kong outside the HKEx building in the city’s Central district in August 2016. Photo: VCG

(Beijing) — The clock is ticking for mainland Chinese companies seeking to list in Hong Kong by taking over companies whose shares already trade on the city’s bourse.

The Hong Kong Stock Exchange is preparing to revise rules to crack down on the practice, known as a “reverse takeover” or “backdoor listing,” as part of efforts to clean up the market, improve the quality of listed companies, and offer better protection to investors.

Also in the firing line are companies that sell their assets and turn themselves into shell companies, but remain listed in the hope that another company will do a reverse takeover.

The proposed regulations aren’t intended to stop backdoor listings and shell activities entirely, but to ensure that companies that use these avenues do not skirt rules and undermine investors’ confidence and overall market quality, according to executives of Hong Kong Exchanges and Clearing Ltd. (HKEx), the company operating the exchange.

HKEx has given interested parties until Aug. 31 to comment on its proposals, which were released in a consultation document at the end of June.

“While shell activities are limited to a small segment of the market, these activities invite speculative trading and can lead to opportunities for market manipulation, insider trading and unnecessary volatility in the market which are not in the interest of the investing public,” the bourse said.

“We essentially allow a backdoor listing.” David Graham, HKEx’s chief regulatory officer and head of listing, told Caixin in a recent interview. “But what we are wanting to ensure is that when this happens, the quality of the assets and the ultimate combined company to be listed on our exchange have been through an appropriate due diligence and vetting process.”

Hong Kong’s stock market, Asia’s third-largest by market value, has become a popular exchange for backdoor listings over the last few years among mainland Chinese companies that would not qualify to list through an ordinary initial public offering (IPO) but want to gain entry to the stock market to raise money or gain credibility. A backdoor listing, also known as a reverse takeover, usually allows a company to skip the lengthy regulatory scrutiny and due diligence that an IPO requires. Once the deal is done, the buyer then injects its assets into the combined listed company.

Reverse takeovers are usually done via shell companies whose owners can earn a decent premium for selling. Currently, a shell company listed on Hong Kong’s main board can be sold for between HK$600 million ($76.45 million) and HK$700 million, while a shell on the GEM — a board for small and midsize companies, formerly known as the growth enterprise market — is worth HK$300 million to HK$400 million, a person who has been involved in several backdoor-listing deals told Caixin.

“Market demand is the key driver,” said a person who acted as a financial adviser for several backdoor listings in Hong Kong told Caixin. Most of the buyers of Hong Kong-listed shell companies are from the mainland, where an IPO or backdoor listing is more difficult to carry out because of tougher regulations, he said.

Many of these Chinese companies can’t meet the regulatory requirements for IPOs in Hong Kong either, so a reverse takeover is a good choice, the financial adviser said. Acquiring a Hong Kong-listed platform also gives companies access to international financing, an additional advantage especially given the tight controls on cross-border capital flows in China, he added.

The China Securities Regulatory Commission has tightened scrutiny of backdoor listings on the mainland in recent years. The latest round of regulation came in June 2016, when the watchdog curbed fundraising through the shell-company takeovers to prevent speculative deals.

In the three years preceding the new rules, 136 proposed backdoor listing deals were in the A-share market, of which 30, or 22%, eventually failed, according to data provider Wind Information Co. Ltd. In the two years since the crackdown, there were only 41 proposed deals, of which 37% failed.

A backdoor listing isn’t a bad thing in and of itself, but many companies try to take advantage of the mechanism and use it as a shortcut to get listed more quickly than if it were done the proper way, said Stephen Peepels, a corporate finance lawyer with law firm Hogan Lovells International LLP in Hong Kong.

“I think all exchanges worldwide, Hong Kong included, now are saying, ‘That’s really not something that we want to support.’” he told Caixin.

However, not all backdoor listings are aimed at circumventing regulations, said Stephen Chan, a Hong Kong-based lawyer at law firm Dechert LLP. Some companies just have to go public as quickly as possible because shareholders need to exit, while others believe that reverse mergers can achieve synergies, he said, adding that exchanges do basically accept those kinds of backdoor listings.

The impending tightening of regulations in Hong Kong is discouraging some companies from conducting backdoor listings.

The financial adviser told Caixin that some small companies that initially considered backdoor listings have given up the idea after consulting him because costs will go up and the structure of the transaction will become far more complicated in order to comply with the new regulations.

But the heightened scrutiny won’t deter those who are determined. Anthony Neoh, the former chairman of Hong Kong’s Securities and Futures Commission, told Caixin that there are many “smart people” in Hong Kong, and they can always find a way to deal with the regulations if it’s profitable for them.