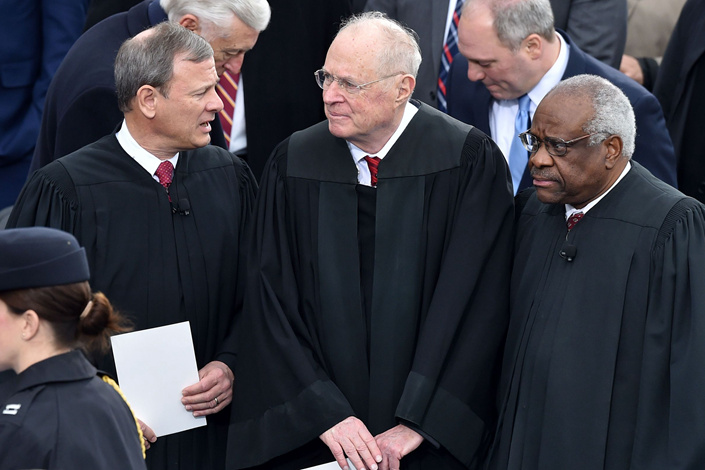 (From left) U.S. Supreme Court Chief Justice John Roberts and justices Anthony Kennedy and Clarence Thomas stand on the platform of the U.S. Capitol in Washington on Jan. 20, 2017, before the swearing-in ceremony of U.S. President-elect Donald Trump. Photo: VCG

Justice Anthony Kennedy recently announced his retirement from the United States Supreme Court at age 81. Since 1988, Kennedy has played an extraordinarily important role in American life. His vote often determined how the Supreme Court would rule in key cases involving issues such as the death penalty, punitive damages, voting rights, and same-sex marriage.

Thirty years ago, I was a fellow at the Supreme Court, where I assisted Chief Justice William H. Rehnquist. After returning to St. Mary’s University, over a span of more than a dozen years I recruited Rehnquist and justices Ruth Bader Ginsburg, Antonin Scalia, John Paul Stevens, and Sandra Day O’Connor to teach in the St. Mary’s summer law program in Innsbruck, Austria. Later, my colleagues did the same with Chief Justice John Roberts and Justices Samuel Alito and Clarence Thomas.

Unlike so many recent U.S. Supreme Court justices, Anthony Kennedy had no special ties to St. Mary’s University. Kennedy annually taught in Salzburg, Austria, two hours from Innsbruck. We never succeeded in luring Kennedy to Innsbruck or to the St. Mary’s University home campus in San Antonio, Texas. However, on a few occasions, Kennedy “borrowed” justices from us to guest-lecture for his classes in Salzburg. I can recall at least one thank-you note.

When I worked at the Supreme Court, Kennedy was a young justice who impressed me with his teaching abilities. I regularly gave briefings for distinguished visitors from around the world. On one occasion, Kennedy joined the briefing and sent the court staff scurrying to find a portable blackboard. When they set it up in one of the court’s ornate conference rooms, he put it to good use, explaining the court’s workings to the visitors.

Soon thereafter, Kennedy authored an opinion that demonstrated that he well-understood the free-speech guarantees of the U.S. Constitution’s First Amendment. Those freedoms play a unique role in American society and are not to be taken for granted.

Years later, around 2004, I attended events at a Soochow University in Suzhou, China, which marked the opening of the Kenneth Wang School of Law, which was then the most-impressive law school building in the country. Kennedy spoke to the assembled guests by video on a large screen.

It was utterly remarkable, and perhaps unprecedented, to see a U.S. Supreme Court justice speaking at the dedication of a great law school building in China.

Rather than delivering a pro forma speech, Kennedy spoke for perhaps 25 minutes about one of the most difficult and important topics: the demands of the rule of law.

Kennedy explained to the audience of Chinese and international guests that the rule of law means that decisions must be made by judges according to the law and fair procedures (not politics), and that no one is above the law.

But he went on to emphasize that rules, procedures and legal accountability are not enough. He said that no country complies with the demands of the rule of law unless its legal system regularly demonstrates respect for human dignity.

This presentation in China was quintessential Kennedy, for he is at heart an internationalist. His mind is open to the legal insights of other countries and to the wisdom of other places and times. He believes that America has a role to play in building legal institutions not just in the United States, but around the world. As one of several globe-trotting justices, he threw himself into the work of the U.S. Supreme Court but also into larger endeavors of potentially lasting value to human development and peace.

Kennedy will be remembered as a great Supreme Court justice not simply for the pivotal role that he played in so many cases during his era on the court. Rather, he will be ranked as great because he was open-minded, outward-reaching and passionately committed to judicial independence, human rights, the rule of law, due process, free expression and respect for human dignity.

That is what makes a justice truly great.

Vincent R. Johnson is South Texas Professor of Law at St. Mary’s University, and a leading expert in civil law and legal ethics.