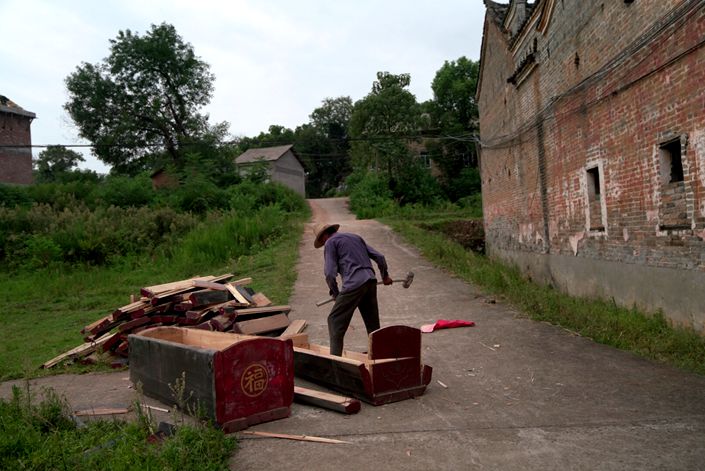 On July 27, workers hired by the government took away the unused coffin that Huang Hao and his family had prepared for his elderly father and crushed it. The following morning, the father, who had just turned 80, was found dead in his bed.

“My father needed a stick to help him walk and had one or two operations in the past, but he had no major health issues before his sudden death,” Huang, a resident in the eastern province of Jiangxi, told Caixin in a recent interview.

Some 5,000 coffins have been confiscated or destroyed by authorities in Zhangzhu, a town of 560,000 in Jiangxi, as part of a controversial provincewide initiative to switch from ground burials to cremations by the end of 2020.

The policy drew a rare rebuke from Communist Party news outlet The People’s Daily, which called the campaign “cold-blooded and overbearing.”

For decades the party has sought to shift residents away from ground burials, a practice that was dismissed as “feudal superstition” by Chairman Mao Zedong, whose embalmed body has been on display in a mausoleum in central Beijing since his death in 1976.

But burial remains popular in rural China, where families often save for years to buy a high-quality coffin for their loved ones. Unused coffins are often stored in homes for years as sacred objects believed to bring good luck and longevity.

A ground burial requires up to 4 square meters (43 square feet) of space, roughly eight times the space needed after a cremation, according to a local official.

No burials will be allowed in Jiangxi after 2020, according to a plan released by the province’s civil affairs department. Furthermore, two-thirds of cremated bodies must be buried in cemeteries built by the governments to save land, according to the document, which was released in 2015.

The civil affairs authority said it will crack down on families that bury the remains of their loved ones in body-length coffins.

Jiangxi residents will have to adjust to the plan. Little more than a third of bodies were cremated in the province by the end of 2017, up from 28.6% a year earlier, according to the party-run Jiangxi Daily.

Huang’s family bought two coffins for his parents over a decade ago. They each cost more than 3,000 yuan ($439), or one-fifth the annual disposable income for rural residents in Zhangshu.

“My father went through a lot of hardship throughout his life and wished to be laid to rest in a good-quality coffin,” he said.

Huang said that he understands the government’s push for cremation, but enforcement by local authorities had been too forceful and heartless.

A woman from the same area told Caixin that her family had to surrender two coffins crafted for her in-laws before Aug. 1. They received 2,000 yuan in compensation for each, but that was short of what the family spent on them, she said.

Ground burial is a sacred tradition in many places in China, and the drastic policy change is not only an affront to a time-honored tradition but could breed discontent toward the local governments, according to Lü Dewen, a professor with Wuhan University who specializes in rural governance.

Amid the controversy, the Jiangxi civil affairs department on Wednesday issued a notice saying it will soften the extreme measures and promised to listen to the public’s grievances.

Huang said that his father, who died before the Aug. 1 deadline, qualified for a ground burial, according to government policy. But they could not find a place to buy a new coffin, as most of the shops selling them have been ordered to close, and the father was cremated instead.