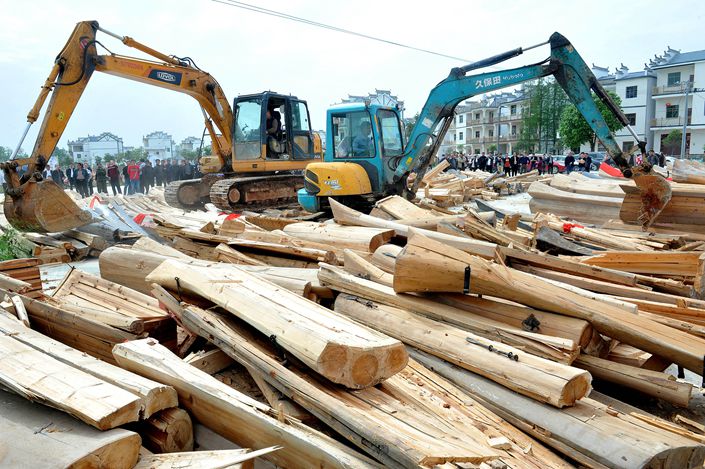 As part of a campaign to phase out burials and replace the practice with cremation, enforcement teams have entered village homes, seized empty coffins, and smashed them with excavators. Many elderly people, who by local custom have saved up for many years to purchase their own coffins, have been reduced to tears by this violent form of law enforcement.

In their eagerness to hasten reform, officials have provoked a public backlash. Why do local governments choose to take such radical measures, knowing that “one size fits all” policies rarely end well?

Ultimately, the outrage highlights how China’s policymakers and implementers pay little attention to the will of the people. They tend to view measures that affect people’s feelings the same way they do ordinary administrative work.

In many parts of Jiangxi, it is customary for people to begin preparing their own coffins by the time they have reached middle age. The coffins, which are kept in people’s homes, are personal belongings. What gives officials the right to seize them? Some locals spend their life savings on their coffins, yet local governments are offering only 1,000 yuan ($146) to 2,000 yuan in compensation.

Some say that the officials are obeying government documents. But the Chinese government amended its Regulations on Funeral and Interment Control years ago in 2012, striking out a clause allowing policies to be forcibly implemented in the event that someone refuses to cooperate. The amendment was aimed at preventing the violent enforcement of funeral-reform measures.

Funeral reform affects tens of thousands of families and has strong social significance. The government cannot simply implement this kind of policy without doing significant mass work — that is, making an effort to win public approval. Funeral reform will only gain the acceptance of the public through persuasion and education. Jiangxi’s campaign can be seen as a textbook example of how not to conduct mass work.

In mid-July the Jiangxi government held a meeting on the funeral reforms, where officials called for reforms to be carried out through a five-step process of “educating, blocking, clearing away, managing, and transforming,” with education or “enlightenment” coming first.

But what exactly does the local government mean by “educating”? Based on what has already happened, the people being educated by officials are mostly other officials who were required to be role models in the funeral reform. The information being conveyed is that the government is determined to carry out reform, and this is conveyed through displays like the smashing of coffins. Actual attempts to win over the public have mostly been monetary in the form of compensation for surrendered coffins.

In the end, the results achieved by officials are the effect of administrative push rather than public mobilization. They appear on the surface to have achieved their results through promoting new ideology, but in reality, the end product stems from administrative coercion. So even if short-term goals can be met, the lack of mass acceptance exposes reform to the risk of collapse.

Funeral reform is an issue that touches on many important social concerns. Over the years, funeral-reform campaigns have attracted public attention mainly due to spontaneous protests by local residents.

It is crude and preposterous of officials to think they can meddle with human feelings with a single document. It is also counterproductive for the modernization of society.

Chinese society has long been ordered around a series of ethical rules, which are closely related to the practice of ancestor worship. Even today, ancestor worship still has active relevance, and funerals serve as important tools for maintaining social order and helping people find psychological stability.

Areas where ancestor worship and funeral culture are well-developed frequently face fewer social problems. In China’s rural areas, which are undergoing great changes, it is especially important for people to have a “meaning system” that anchors them psychologically.

Jiangxi province’s Ganzhou prefecture, which is currently at the center of controversy, is one of these regions with a strong clan culture, and has not faced problems common in other areas, such as cults and suicides of the elderly.

Why is this so? This is because the elderly in Ganzhou have great reverence for the afterlife and are very careful when it comes to death. Preparing a coffin is seen as a major life event, and helps the elderly face death calmly. Shouldn’t a practice that offers this kind of spiritual stability be considered a mechanism for maintaining social stability?

Essentially, the government is not only robbing the elderly of coffins, but also taking meaning away from their lives.

The events in Jiangxi remind us that there is an urgent need for the government to reflect on funeral reforms, and for the relevant departments to stop using extreme measures. To condemn China’s existing funeral culture without thorough research and strict proof is to treat the country, society, and the Chinese people extremely irresponsibly.

Reform can target practices that are irrational or are not accepted by the public, such as luxury tombs and striptease performances at funerals. But it should not condemn the good parts of funeral culture in the same way.

My own hometown in western Fujian province has already accepted the practice of cremation for around a decade. Ten years ago, there was no crematorium in our county, and there was no mobilization effort by the local government, but rural residents still took the initiative to transport bodies to a neighboring county for cremation. The reason was simple: Cremation was a much cleaner process. The local government of my hometown is now also advocating cremation, but does not need to resort to force.

It is clear that as time passes, traditional funerals can start to integrate modern social ideas. Once the public starts to accept these ideas, customs can be changed.

“Saving land resources” and “protecting the environment” are frequently cited as reasons for funeral reform. But these are specious excuses. In vast, mountainous areas, burials generally take place on barren hillsides and do not occupy cultivated land. Cremated remains are generally still buried according to traditional practices, so switching to cremation does not necessarily save land.

Most Chinese people still have nostalgia for their hometowns — not only for the landscape they grew up in, but also for their ancestors’ graves. The annual Tomb Sweeping Festival exists not to increase tourism, but rather to allow people to tend to their ancestors’ graves. But if funeral reforms cause people to lose their reverence and to lose the graves that were the spiritual focal points of Chinese society for so long, what is the point of these reforms?

In order to bring funeral reform back in line with its original purpose, academics and policymakers should seriously study all the issues related to it. The government should not use funeral reforms to achieve other policy objectives such as exchanging land quotas, or to justify crude reforms using policy objectives like saving land resources and ecological construction. This would not only go against the basic principles of policymaking, but would also cause future problems for grassroots governance.

Lü Dewen is a sociology researcher at Wuhan University. This piece has been translated from Chinese and edited for length.