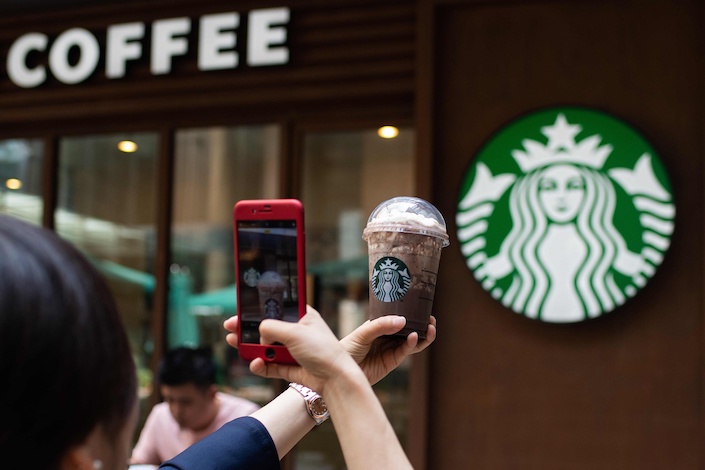 A woman takes a picture of her beverage at a Starbucks coffee shop in Beijing, on May 25. Photo: VCG

American coffee chains have been left with a bad taste in their mouths in recent weeks.

While the market has been shocked at the unexpected drop in Starbucks Corp.’s sales in its largest overseas market, they might not have noticed that another chain, The Coffee Bean & Tea Leaf, is quietly hitting the brakes in a market from which it has already retreated once.

The U.S. companies have been challenged by young local startups reshaping the landscape by providing delivery services, generously offering coupons and discounts, and aggressively opening new branches in recent months.

The Coffee Bean & Tea Leaf’s franchisee in China, a unit of South Korean retailer E-Land Group, has announced it is withdrawing from a deal the two parties inked in 2015. E-Land said it will close the remaining local stores over the coming weeks.

According to the official WeChat account of The Coffee Bean & Tea Leaf, the chain has only 15 locations in eight Chinese cities — far from the goal of 700 stores the pair announced three years ago as part of a “long-term expansion plan.” A year later, their ambition swelled to 1,000.

But the American coffeehouse chain said it “remains firmly committed to developing the China market as a key part of its core growth strategy,” but it hasn’t responded to Caixin’s request for updates on potential new partners.

This is the second time that the chain’s China licensee has pulled out. Its presence in China dates back to as early as 2007, but in 2015, consumers complained that The Coffee Bean & Tea Leaf locations closed without explanation. The company secured its South Korean partner a few months later.

While The Coffee Bean & Tea Leaf situation may be a tempest in a teapot, the big jolt to China’s coffee industry recently has been the 2% drop in Starbucks China stores’ sales revenue in the latest fiscal quarter ended July 1. This has been the first quarterly drop since the coffee giant started to issue China earnings reports in the third quarter of fiscal 2016. Meanwhile, Starbucks’ global sales and those in the U.S. both increased 1% during the same period.

Days later, Starbucks unveiled a major partnership with Chinese internet giant Alibaba Group Holding Ltd. that aims to deliver cups of joe in 30 cities by the end of this year.

The move imitates the model of two Chinese startups that feature online ordering and delivery. Coffee Box was a pioneer in 2012, delivering coffee from Starbucks and Costa Coffee and later shifting to selling its own coffee, but remaining a smaller player.

Luckin Coffee, which just started to operate in January this year, has made headlines with its lightning-fast store construction: It had opened 800 shops by the end of July, and has vowed to operate 2,000 locations by year-end.

In comparison, Starbucks opened only 257 new stores from July 2017 to the same period this year in the entire Asia-Pacific region. As of May 15, it had 3,300 China locations. Coffee Box has started to run some offline cafes as well this year.

“The emerging ‘internet coffee’ trend has forced the rivals to innovate. That’s why Starbucks began delivery services as well, because it sensed that there is a demand,” said Zhu Danpeng, a food-and-beverage industry analyst with the China Brand Research Institute.

The new market entrants “will prove to be short-lived,” Wong predicted.

Luckin and Coffee Box generally sell drinks that are 10% cheaper than Starbucks and they often roll out 50% discounts.

Zhu said that the new-generation coffee chains can be competitive on price, and make the mass market more stratified as Starbucks and Costa Coffee occupy the high end, followed by midlevel players like Luckin and fast-food chains McDonald’s and KFC.

But independent retail analyst Li Chengdong said that it could be hard for new brands to sustain themselves because most Chinese people don’t drink coffee, and they can’t afford a drink that’s even more expensive than it is abroad.

The smallest-size Mocha costs around 30 yuan ($4.40) in a Starbucks China store, roughly 30% more expensive than it is in the U.S.

Most of the cafes’ customers are young people in the big cities, Li said, adding that the coffee industry in big Chinese cities is increasingly saturated.

But the emerging startups might have a chance to survive if they keep offering discounts to attract part of Starbucks’ customers who are price-sensitive and not loyal to specific brands, Li said.