By Coco Feng and Yu Bokun 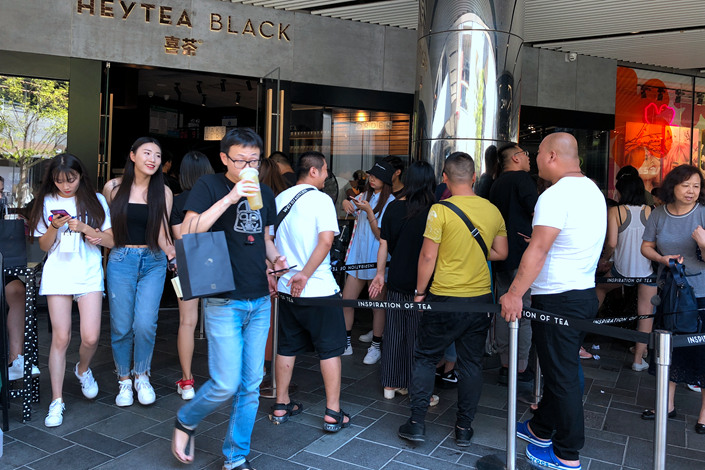 A queue winds out of a popular Heytea store in downtown Beijing on Thursday. Photo: Wu Gang/Caixin

China’s hottest teahouse, Heytea, announced Thursday it will open a Singapore store, its first overseas expansion, but can it taste success in a tea market that has never embraced a mainland brand?

Heytea, which has been propelled to national success on the back of its social media-ready beverages, said it would open its first Singapore location by the end of this year, and is also planning to enter Hong Kong within the year, Heytea Public Relations Director Vivian Xiao said at a news conference on Thursday.

The company said that its ambition in Singapore and Hong Kong is “more than just one or two stores,” but analysts projected different opportunities and challenges in each of the markets where no Chinese mainland tea brands have succeeded.

Jason Yu, China general manager of market research firm Kantar Worldpanel, told Caixin that Singapore may be a useful place for Heytea to begin to “understand overseas culture” because it is a country that combines Eastern and Western cultures.

But “it will not be easy for Heytea,” Yu said, adding that Singapore has already has its own competitive tea sector.

Bubble tea — a sweet milky tea with chewy pearls of tapioca — was introduced to Singapore in 1992, and the beverage became a sensation by 2002 when the number of bubble tea shops in the city grew to at least 5,000. The popularity waned afterwards due to market saturation and consumer preferences changing, but its popularity surged again in the following years, according to the Singapore National Library Board.

The top three food and beverage street stall brands in Singapore — Old Chang Kee, Mr. Bean and LiHo — are all local, having market shares of 3.1%, 1.2% and 0.4% respectively, according to market research firm Euromonitor International.

In Hong Kong, “chained coffee shops were still the mainstream for pour-over beverages three to four years ago,” said Euromonitor drinks and tobacco analyst Eunice Chan, adding that tea business is catching up and “you can see a couple of bubble tea stores on each block nowadays.”

The Hong Kong market is not yet saturated, and local health-conscious consumers prefer premium tea bases over milk tea powders, said Chan, who expects the tea category to increase by 3% in 2018 while instant tea retains negative to flat growth.

The top three milk tea brands in Hong Kong are Gong Cha, Ten Ren Tea and Sharetea, all from Taiwan.

Founded in 2012, Heytea emerged from the obscure city of Jiangmen near Guangzhou and is now a nationwide brand with nearly 100 locations.

It is on the cutting-edge of Chinese tea trends, offering the latest popular drinks such as fruit teas — teas mixed with fruit juice — and the odd-sounding but wildly popular cheese tea — which features a floating cap of sweet or salty cheese, usually made from a mix of cream cheese and milk. It also uses better-quality teas — as opposed to the powdered mixes favored by older-style bubble tea shops — and focused on offering the drinks in modern, fashionable environs.

It also notoriously keeps people waiting for their drink. Each Heytea location is small, and long lines often stretch out of the doors of the most popular locations all day.

In order to solve the problem, it started to provide delivery services earlier this year, which now covers four Chinese cities. It is not the only higher-end drinks merchant getting in on delivery, which was usually the domain of cheaper rivals. Starbucks Corp. recently forged a partnership with Chinese internet giant Alibaba Group Holding Ltd. which aims to deliver cups of joe in 30 cities by the end of this year.

According to Euromonitor, Heytea overtook Taiwan’s Coco to be China’s second-largest milk tea provider last year, with a market share of 2.4%, but still lagging behind the leader, Yiddtea, which snapped up 11.2%.

The company sold around 2,000 drinks per store, per day last year, according to market researcher Daxue Consulting. Heytea said that some of its most patronized stores can sell more than 4,000 drinks a day, or six every minute over the course of a 10-hour day.

“The tea culture itself is defined by the East, especially China. After so many years of development, we are confident that as long as we hit it big in China, we will certainly hit it big in the international market,” founder and CEO Neo Nie said.

However, like many Chinese food companies, it has faced at least one food safety scandal. In May, the local food regulator in eastern Beijing found that the workers at one of its stores weren’t wearing masks to cover their noses and mouths, the official People’s Daily reported.

A previous version of the story misstated the ingredients in Heytea's cheese teas.