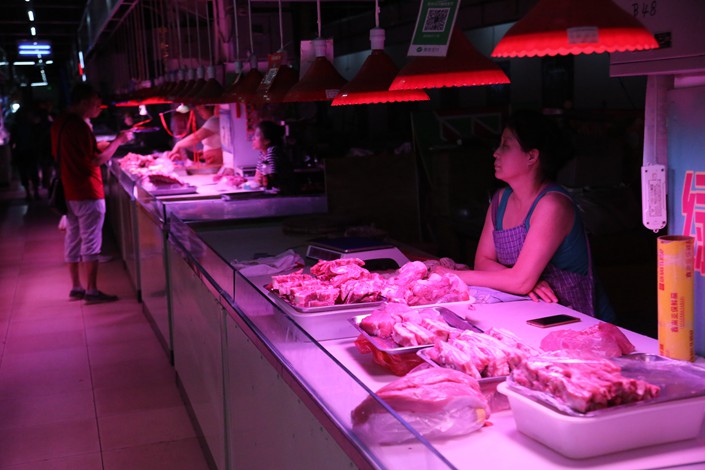 A farmer’s market in the northeastern city of Shenyang, Liaoning province, on Aug. 5. Photo: IC

China has discovered a second outbreak of a deadly pig disease in two weeks, stoking fears that output could take a hit at the world’s largest pork producer.

It was discovered that 30 pigs at a slaughterhouse in Zhengzhou, capital of central China’s Henan province, died on Tuesday from African swine fever, the Ministry of Agriculture and Rural Affairs said on its website Thursday (link in Chinese).

The ministry didn’t name the company operating the facility, but said that 30 of the remaining 260 pigs involved were also infected.

However China largest pork processor, WH Group Ltd., outed itself as the slaughterhouse’s operator, saying in a Friday filing to the Hong Kong bourse that the relevant unit has been ordered to close down the slaughterhouse for six weeks, beginning Thursday.

However, the company said it “is not aware of any detection of African swine fever or other epidemic swine disease at other slaughtering factories of the group.”

African swine fever, which is found in warthogs, bush pigs and ticks, does not affect humans — but could post a severe threat to the country’s pig-farming industry, which accounts for more than half of global output and provides the majority of the meat consumed in China. There is no vaccine.

Cases have been reported across Europe, Russia and sub-Saharan Africa, but never in East Asia until China reported the first ever case on Aug. 3, according to the United Nations’ Food and Agriculture Organization.

The first case took place earlier this month in Northeast China’s Liaoning province, where 47 out of 383 pigs at a farm died and another 47 fell ill, resulting in the culling of thousands of pigs.

The Liaoning government has asked local authorities in the province to launch emergency inspections of all pig farms, swine markets, slaughterhouses and treatment sites.