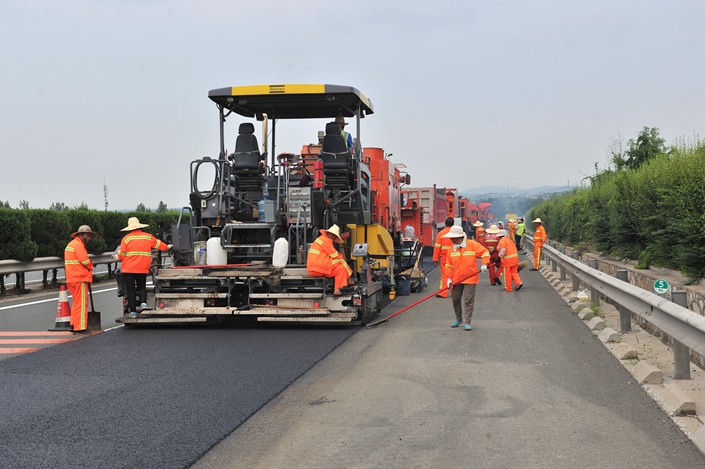 Repair work is underway on the expressway in jinan, shandong province, July 02, 2018.

The government is following through on its pledge to prop up China’s cooling economy by approving a slew of new infrastructure projects after several months of slowing investment.

The National Development and Reform Commission (NDRC), China’s state economic planner, in July approved 17 fixed-asset investment projects, which includes construction, machinery and equipment, with a combined value of 77.69 billion ($11.27 billion), it said on its website (link in Chinese). It did not give a specific list of projects that had been approved, but said they included the energy, transportation and water conservation sectors.

The figure marked an almost fourfold increase from June, when just 20.8 billion yuan in new projects were approved, according to calculations by Reuters.

The move appeared to mark a speed-up in infrastructure spending, which grew by a record low of 5.5% in the first seven months of the year, according to data released by the National Bureau of Statistics on Tuesday. China has used such spending to support the economy in the past, including during the global financial crisis of 2008. Beijing is also looking to support its infrastructure builders through its “Belt and Road” initiative that encourages other developing countries to invest in infrastructure using Chinese expertise.

China’s State Council announced on July 23 that it would increase infrastructure investment “in the face of external uncertainties,” although it noted it will firmly refrain from a deluge of strong stimulus policies, according to a news release. “With the economy starting to lose momentum, the government is now shifting its priorities to more immediate risks to growth,” consultancy Trivium China said in a note. “But they want to avoid white elephant projects this time around — a difficult needle to thread.”

Analysts put the lower infrastructure investment rates of previous months down to greater restrictions on opaque and illicit local government borrowing and a nationwide campaign to control debt. Escalating trade tensions with the U.S., which have already led to tit-for-tat tariffs on exports by both countries, are threatening to cloud the economic outlook even further.

The government is also looking to accelerate spending for local projects. On Tuesday the Ministry of Finance told local authorities to “speed up” the issuance of special-purpose bonds to fund infrastructure construction and use at least 80% of their annual quota by the end of September, according to a statement (link in Chinese). Most of the remaining 20% should be sold in October, it added.