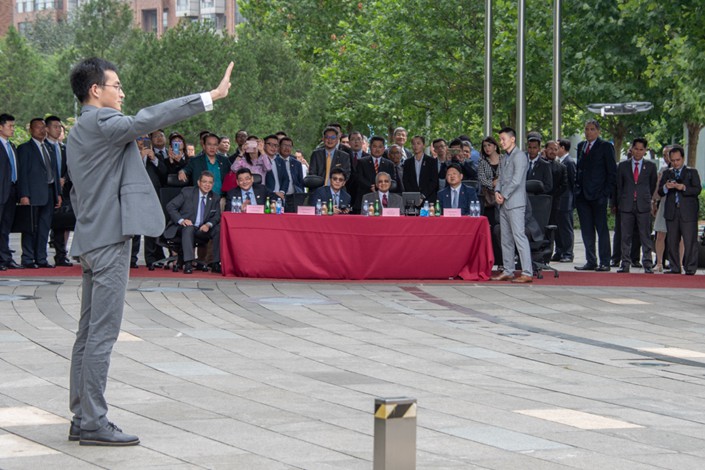 That is what Chinese drone-maker DJI learned during Mahathir’s visit to its Beijing office over the weekend.

Technology cooperation has been high on the agenda of Mahathir’s five-day visit to China, as the Malaysian leader shuttled through the offices of the world’s leading drone-maker and an e-commerce giant, and witnessed the inking of a joint venture deal on new-energy cars.

On Sunday morning at the Beijing office of the Shenzhen-based DJI, Mahathir, along with his ministers of trade, agriculture and industry, watched a demonstration of the latest cutting-edge drone technology, such as controlling a flying drone with hand gestures, according to DJI.

Mahathir, 93, said he is a drone lover and had once completed a set of aerial photographs by using such drones before, the DJI statement quoted him as saying.

Mahathir was particularly “intrigued” with the drone technology being applied in agriculture, according to DJI.

DJI, which has grabbed 70% of the world’s consumer-drone market within a decade, said in the statement that Mahathir has paid great attention to the technology innovations in China and how tech development has impacted traditional sectors, as well as trade and investment.

The tour of DJI in Beijing was preceded by Mahathir’s visit to the respective headquarters of e-commerce giant Alibaba Group Holding Ltd. and automaker Geely Automobile Holdings Ltd., both in Hangzhou, Zhejiang province.

At Alibaba’s sprawling Xixi Park campus on Saturday — Mahathir’s first stop for the China trip — Mahathir told the Chinese conglomerate’s co-founder, Jack Ma, that he would like to learn from the experiences of Alibaba.

“What you have achieved is quite fantastic. … I hope that Malaysia can tap into your innovative ideas so that we can benefit too from modern technology," he said.

Alibaba and other e-commerce platforms have largely transformed China’s retail business. Its affiliated mobile-payment service, Alipay, along with competitors like Tencent Holdings Ltd.’s WeChat Pay, have also made China increasingly into a cashless consumer society.

In June, Alibaba, China’s largest e-commerce company, opened a Malaysia office, its first country office in Southeast Asia, as part of its overseas expansion in the region.

Mahathir’s tech focus culminated on his tour to Geely, where he witnessed a deal between China’s largest private automaker and Proton Holdings Bhd. to create a joint venture that will assist the Malaysian national car brand to tap China’s booming electric-car market.

The establishment of the joint venture — with the two companies each owning 50% shares — will involve the business of assembling vehicles, and the development of a network of dealers to market the Proton range in China.

Geely, which acquired 49.9% of Proton early last year, will continue to ramp up investments in the Malaysia carmaker in the areas of productions and design, Chairman and CEO Li Shufu said in a statement.

On Tuesday, Mahathir will visit an industrial agriculture park in Beijing before flying back to Malaysia, ending his five-day visit.