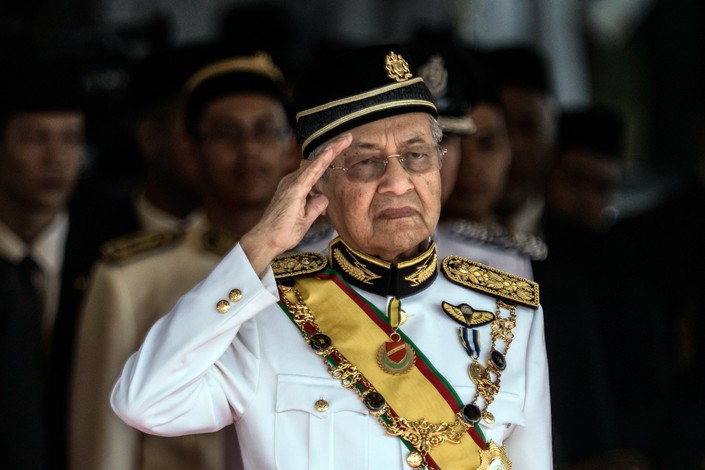 (Beijing) — Malaysian Prime Minister Mahathir Mohamad is set to kick off on Friday his first state visit to China since returning to power, with analysts saying bilateral ties could be tested as the fate of Chinese mega-projects are up in the air.

China’s Foreign Ministry said Monday that Mahathir is visiting the country at the invitation of Premier Li Keqiang. His first stop in the five-day visit will be Hangzhou, East China’s Zhejiang province, where he is scheduled to meet Alibaba Group Holding Ltd. chief Jack Ma and visit automaker Zhejiang Geely Holding Group Co. Ltd., which owns nearly half of Malaysian carmaker Proton.

The 93-year-old Mahathir, who returned to power in a stunning May victory that saw Malaysia’s first change of ruling party since independence in 1957, will then leave Monday for Beijing, where he is expected to hold talks with President Xi Jinping and Li.

This coming visit “has an added significance” because Mahathir is leading a different government and there are “several touchy issues” standing in the way of good relations between the two countries, according to Kadir Jasin, a veteran Malaysian journalist and currently a special adviser on media and communications to Mahathir.

Mahathir has been a regular visitor to China. During his first tenure as prime minister, from 1981 to 2003, he visited China seven times, with the last official visit in October 2001 to attend the Asia-Pacific Economic Cooperation CEO summit, Kadir wrote in his personal blog Wednesday. His commentary was republished by several Malaysian media outlets.

Counting the nine times he came to China after leaving office, Mahathir had made a total of 16 trips, Kadir said.

This Friday visit “is special because Mahathir is returning to China once again as prime minster after a 17-year gap,” he wrote. “Given … Dr Mahathir’s own affinity with China, his visit is not only special but offers the two countries the opportunity to clarify and sort out issues that could stand in the way of good relations.”

Mahathir has unnerved Beijing by saying he will review mega-deals in the country, most of which involve China, that he says don’t bring any financial benefits to Southeast Asia’s third-largest economy.

One of the projects under scrutiny involves China’s largest developer by sales, Country Garden Holdings Co. Ltd., which is building a $100 billion complex of high-end residences and hotels in a southern peninsular state, a move that Mahathir said was targeted at wealthy foreign buyers that would lead to an influx of immigrants.

Another project under the spotlight is the major section of the $20 billion East Coast Rail Link being built by China Communications Construction Co. Ltd. and financed by the Export-Import Bank of China. Malaysian authorities informed the builders in July to “immediately suspend” construction, which is 13% completed.

In recent interviews with various media outlets, including Reuters and the South China Morning Post, the prime minister said his government doesn’t discriminate against Chinese investments. He indeed wants more foreign investments that bring in capital and technology, and that set up plants and employ Malaysians, but not those that bring huge debts to the national coffers.

In July, Chinese Foreign Affairs Minister Wang Yi said Beijing is confident that Malaysia will continue to flourish and develop under Mahathir’s leadership.

“Malaysia is bound to play a more-active and important role in regional and global affairs,” Wang was quoted as saying by Bernama, Malaysia’s state news agency.

Mahathir “is friendly toward China and we dearly cherish the friendship that has been built with him over the years. And we believe that during his visit, there will be even stronger mutual trust built between the leaders of our two countries,” Wang said.

Wang was on a two-day visit to Kuala Lumpur under the invitation of his Malaysian counterpart, and to make arrangements for Mahathir’s state visit to China.

Yu Peihua and Xie Yilin contributed to this report.