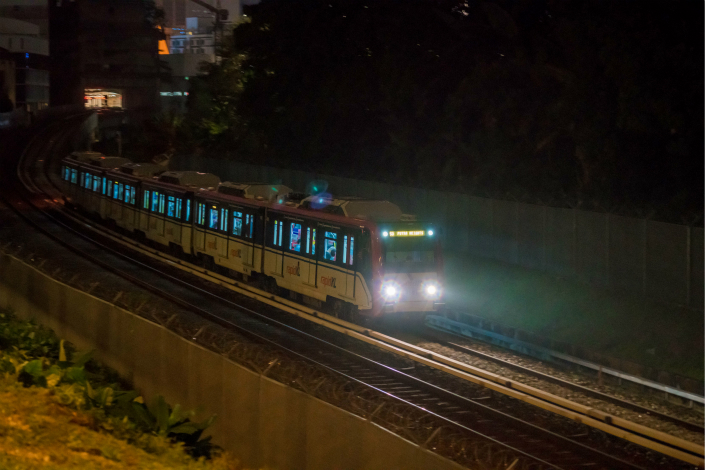 A train is seen running in Kuala Lumpur, Malaysia, on Feb. 23. Photo: VCG

(Beijing) — Malaysia is “renegotiating” with Beijing a proposed 55 billion ringgit ($13.8 billion) railway project touted as one of the largest under China’s program to export its infrastructure-building skills, the country’s new prime minister said.

Mahathir Mohamad believes the project in its previously negotiated form would have deeply indebted Malaysia, causing national coffers to go “bankrupt,” he said in an interview with local business weekly The Edge published Saturday.

Renegotiation of the deal could put the squeeze on the Chinese group that is building the project, in what was considered a major victory for the Belt and Road Initiative — a Beijing-led project that promotes building infrastructure in developing countries.

Malaysia earlier this month saw its first change of ruling party since independence in 1957, as a coalition led by Mahathir secured a stunning election win against the government of Najib Razak, returning Mahathir to the leadership post he previously held from 1981 to 2003.

After the win, the 92-year-old Mahathir said his predecessor’s fiscal practices had landed the nation in a serious debt crisis. The new administration said Malaysia’s national debt has now ballooned to 1 trillion ringgit, accounting for 65% of gross domestic product, sharply higher than the previous administration’s estimate of 51%. Such figures are roughly within the range of those seen in developed countries.

Construction of the China-Malaysia’s East Coast Rail Link (ECRL) kicked off last year and is being built by China Communications Construction Co. Ltd., and mainly financed by a loan from Export-Import Bank of China.

The 688-kilometer (428-mile) network is planned to start on Malaysia’s east coast at the Thai border, and cross to shipping routes of the Strait of Malacca in the west. Its completion is due by 2024.

Mahathir said terms of the original deal “are very damaging” to its economy, according to the interview. “The market should be happy that we are actually strengthening the government finances,” Mahathir told The Edge, estimating the project ultimately would have cost 92 billion ringgit by the time it was paid off.

The prime minister also raised doubts over a few “strange” terms on the contract, such as its requirement to use only Chinese contractors, as well as a payment schedule that requires Malaysia to pay back the loan on fixed dates regardless of construction progress.

When asked by local media about Mahathir’s remarks, China’s ambassador to Malaysia, Bai Tian, said no changes have been made to the ECRL project so far, and he believes the ties between the two countries will flourish under the new government.

The Malaysia project was one of the biggest overseas to date for China’s high-speed rail builder, which has constructed a vast network in its home market over the last decade. But with that build-out slowing down, the company and its many affiliates are looking to foreign markets for new business.

A number of those projects have run into similar troubles, with previously awarded contracts later getting scrapped in the U.S. and Mexico, and being reviewed in the European Union for various reasons.

In addition to reconsidering the east-west rail line, the new government has said it might scrap a project to build a bullet train connecting Malaysia’s capital with neighboring Singapore as part of a deleveraging campaign.

While the fate of the two rail projects hangs in the balance, another Chinese investment that has come under scrutiny under the new administration is Country Garden Holdings Co. Ltd.’s $100 billion sprawling complex of high-end residences and hotels spanning nearly 1,400 hectares (5.4 square miles) and targeting Chinese buyers.

The leading Chinese developer in that project earlier told Caixin it is actively seeking talks with the new Malaysian government to iron out potential issues.