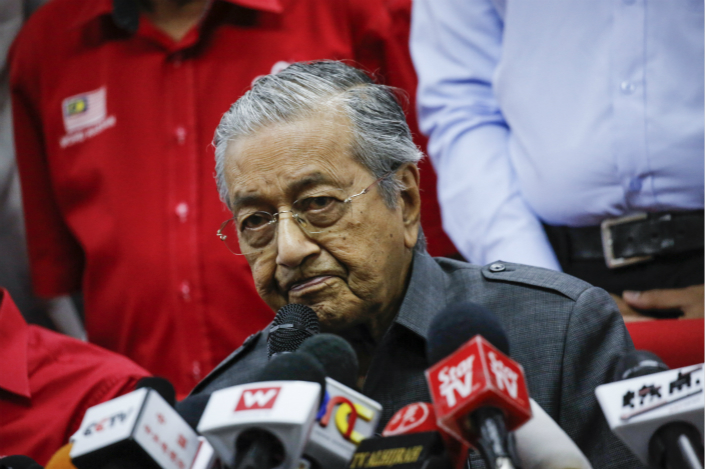 *Prime Minister Mahathir Mohamad canceled the Kuala Lumpur-Singapore High Speed Rail project amid a reassessment of the country’s mega projects, which he said do not benefit the economy

*A consortium of Chinese companies led by China Railway Corp. had planned to bid on the 350-kilometer (217-mile) project, which was thought to be worth around $17 billion

China’s railway builder ran into another setback to its overseas expansion aspirations after the new Malaysian government announced it will scrap a bullet-train project linking its capital to southern neighbor Singapore.

Prime Minister Mahathir Mohamad said at a news conference Monday that he had decided to drop the Kuala Lumpur-Singapore High Speed Rail project in a move to reduce the country’s debt of over 1 trillion ringgit ($251 billion).

Malaysia will have to talk to Singapore about the resulting penalty, estimated to be around 500 million ringgit, he said.

The 92-year-old triumphed in a general election early this month, and has vowed to review a slew of mega projects in the country approved by the previous administration, saying they are the product of excessive borrowing and do not benefit the economy.

A tender for the high-speed rail project was issued in December, with a deadline scheduled for late-June. The 350-kilometer (217-mile) line, which was scheduled to start running in 2026, was designed to cut the travel time between Kuala Lumpur and Singapore to just 90 minutes. The trip currently takes about four hours by car.

A Chinese consortium led by China Railway Corp. was going to participate in the bidding, which has also attracted rivals from Japan, South Korea, France and Germany.

China Railway has constructed a vast network in its home market over the last decade. But with that build-out slowing down, the high-speed rail builder and its many affiliates are looking to foreign markets for new business.

A spate of those projects have run into similar troubles for various reasons, with previously awarded contracts later getting scrapped in the U.S. and Mexico, and coming under review in the European Union.

Malaysia is also renegotiating with Beijing a proposed 55 billion ringgit East Coast Rail Link, touted as the largest single project under China’s Belt and Road Initiative, citing unfair terms in the deal and the alleged sky-high payment it has to make to China.

“The East Coast project is still in the stage of acquiring land, and the new government may ask China to lower the costs,” said Ngeow Chow Bing, deputy vice chancellor of the Institute of China Studies at the University of Malaya in Kuala Lumpur. “If Malaysia decides to drop the project, it may have to pay a penalty to China.”